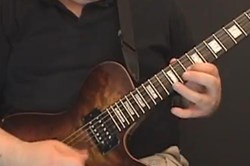 In this guitar lesson, now available on YouTube.com, Silvio Gazquez teaches a cool lick in the style of legendary guitarist Joe Satriani.

A “lick” is a sequence of notes from a scale that are used in a section of a solo, by using an array of techniques such as bends, slides, and hammer-on/pull-offs.

Joe Satriani is an American instrumental guitarist best known for creating the G3 Tour and for being the instructor of the starts with students such as Kirk Hammet, Alex Skolnick, and Steve Vai. Currently he is the guitarist for the Super group Chickenfoot that also features former members of Van Halen.

Silvio Gazquez is a native of Argentina and began studying guitar at the age of 14. At age 18 Silvio moved to La Plata to study classical guitar at Bellas Artes University. After three years Silvio left to pursue the electric guitar on his own. In 2004 Gazquez was chosen as a finalist for the Guitar Idol contest, but was not able to make the trip, but was chosen to participate on the Guitar Idol compilation CD. Silvio’s instructional DVD “Virtuoso Guitar Secrets” is available through GuitarControl.com.