Advertising.my, the leading advertising agencies in Malaysia is launching its billboard advertising services for the Malaysian market. 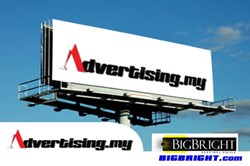 Billboard advertising has been one of the most effective media used in recent years mainly due to the rising popularity of mobile devices.

Advertising.my is one of the most prominent outdoor advertising agencies in Malaysia and in the surrounding region where it has been involved with all types of innovative and contemporary advertising methods.

Started off as an online agency with a strong focus on internet advertising and media more than 15 years ago, Advertising.my has grown and expanded into all other areas in this market segment. Today, the agency offers a complete and comprehensive range of services that include media planning and booking, campaigns planning and execution as well as in maximizing the utilization of media in above, through and below the line areas.

As part of the agency’s continuous efforts to provide cutting-edge services, Advertising.my is offering billboard advertising services that will cover the entire Malaysia. These services will complement the current range of services offered through Advertising.my’s portfolio where advertisers can now enjoy more coverage and better visibility throughout the major high-traffic locations nationwide.

The offering of Malaysia billboard services is extended not only for brand owners but for agencies who are interested to collaborate in campaigns. Advertisers from all segments will enjoy one of the most extensive coverage of billboards around Malaysia while additional discounts and rebates are offered as well as added incentive for working with Advertising.my.

Billboard advertising has been one of the most effective media used in recent years mainly due to the rising popularity of mobile devices. In today’s environment, consumers are spending more time outdoors instead of within the home which means that they are more likely to be exposed to outdoor media. In Malaysia, vehicle owners are constantly on the rise where thousands use major highways, Malaysia airports and roads to travel to and from work while the public transportation system is constantly upgraded and improved. This is further enhanced through the construction of the MRT (Mass Rail Transit) system in the Klang Valley which will surely elevate the use of public transport in the capital.

Advertising.my will be offering a full range and complete chain of services for advertisers in its billboards. This will include the initial discussion and conceptualization of the idea to the designing of the ad and will complete when it is launched. Advertising.my will be offering affordable and very economical printing facilities through its in-house team of highly qualified designers and equipment.

Billboards that are available through Advertising.my’s network are in major roads and highways. This means that advertisers will have their ads seen by their respective target markets at locations with the highest traffic of people and vehicles.

The billboard spaces are available in all regions that cover the northern, eastern, central and southern regions of Peninsular Malaysia as well as in East Malaysian states of Sabah and Sarawak. Hence, advertisers will be able to display their large posters to Malaysians from all walks of life regardless of location or region.

Another major location available is in Langkawi Island, one of the top 3 tourist destinations in the country. Langkawi welcomes thousands of foreign tourists each month while the trending in local visitors is currently on the rise as well due to its distance, offerings and affordability mainly because more and more Malaysians today prefer to travel within the domestic market. In this context, Langkawi Island is the perfect travel destination for them.

Meanwhile, for advertisers who are targeting vehicle owners, highways are among the most suitable locations which include the billboards in MRR2 expressway in the Klang Valley. This is one of the most popular highways in the country where it is used by thousands of vehicles each day, connecting major suburbs like Damansara, Cheras, Ampang and Kepong. The North-South PLUS Highway is one major road with one of the most effective locations for billboards offered by Adveritsing.my. Ad spaces along the entire stretch are among the most affordable and value-for-money among others.

Apart from billboards, Advertising.my is offering other options like bus and taxi advertising and other transit media. Advertising rates in these media are affordable and offers extremely attractive options for advertisers as the ad can be seen in most urban areas around major towns and capitals of the country.