"Save the Mistletoe for Me" by Christina Reese, Written by Pamela Phillips-Oland and Jeff Silverman, Is Re-released for the 2013 Christmas Season 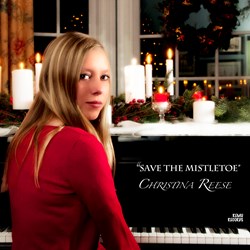 Reese, who recorded the vocals at 13 years old, has a pure, child-like quality to her voice which takes us back to a time of youthful, holiday excitement and family fellowship.

The R.E.P. group is proud to announce the re-release of “Save the Mistletoe for Me”, a single which captures the essence of the holiday season. With lyrics written by Pamela Phillips-Oland and music composed and arranged by Jeff Silverman, the song encapsulates the warm innocence of Christmas. Performing on the track are up-and-coming pop vocalist Christina Reese (christinareesemusic.com) and classically trained pianist Paul Rucker. Reese, who recorded the vocals at 13 years old, has a pure, child-like quality to her voice which takes us back to a time of youthful, holiday excitement and family fellowship. “Mistletoe…” is more than a song; it’s a gift of timeless, emotional joy.

Christina Reese, now 14 years old, is a singer-songwriter who began studying theory and piano at 3 years old, and began training on percussion at 7, began performing at 10. A year later, Reese founded the country pop band, Hangin’ with Stogie, performing drums, keys, cello, and vocals. Reese has written and co-written music that has reached the charts in Europe, Australia, and Japan. Reese has been honored to have been invited to the IEBA showcase, America’s Got Talent, and other national level showcases, and perform live on Long Islands 103.9 the "Real Radio Show", News 4 Nashville, and B101.5 Fredericksburg, VA. Reese has an EP to follow in Winter, 2014. "Save the Mistletoe for Me" is available for download on iTunes.

Lyricist Pamela Phillips-Oland (http://www.pamoland.com) is a 3 time Grammy award nominated songwriter. She has written over 500 recorded songs, performed by such artists as Aretha Franklin, Whitney Houston, and Frank Sinatra. Her film and TV credits include the opening and closing themes for Disney’s 102 Dalmatians; Genie “Best Song in a Motion Picture” Award nominated track “Center of My Heart” from Blizzard; the end title to Gideon; and numerous television features on such shows as J*A*G, The Sopranos, Xena: Warrior Princess, Crayola Kids Adventures, and dozens of others. Rounding out her already impressive credentials is the authorship of two popular music industry books, The Art of Writing Great Lyrics and The Art of Writing Love Songs.

Jeff Silverman (palettemusic.net), former session and touring guitarist for Rick Springfield, co-wrote and produced the track. He was co-writer and producer of the CD From the Vault, a collection of previously unreleased and remastered tracks from Springfield. It was re-released in 2010 on Frontiers Records. Silverman also recorded and produced at the legendary Sound City Studios in Los Angeles, CA, frequented by such artists as Tom Petty, Fleetwood Mac, Foo Fighters, and the aforementioned Springfield.