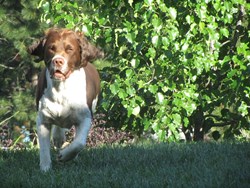 Northern California 2012 top ten ranked West Coast Bird Dog Championship Springer Spaniel, Blue Smoke Bodacious (lovingly nicknamed Bodie), returned to competition this season after stem cell therapy by Vet-Stem, Inc. helped him with the pain of osteoarthritis after a diagnosis of severe hip dysplasia. Bodie came back to the competitive field this season to secure a 3rd place after a rare shell malfunction denied him anything higher in the BDC High River Classic. Bodie achieved the third highest qualifying score overall, coming in just under his brother, Trapper, who is older by one year.

Bodie, now three years old, was diagnosed at only eight months with canine hip dysplasia. His owner began to notice he had difficulty getting up from a lying position, and would often ‘bunny hop’ or resort to using both legs together while running. His veterinarian recommended a medication that would help reduce pain so that he could be worked to build muscle structure early on, but arthritis eventually set in slowing Bodie’s hunting and competitive training. Even through the discomfort he continued to achieve a number of first places, a few second places, and only one 3rd place score in the West Coast Division of BDC before his stem cell therapy.

Why has stem cell therapy had such a positive impact on Bodie’s condition? In contrast to widely used drug therapies for pain management, cell-based therapies can promote healing, reduce inflammation, and decrease pain. In a study using Vet-Stem Regenerative Cell Therapy on dogs with osteoarthritis of the hip joint it was found that regenerative cell therapy (adipose-derived stem cells) decreases patient discomfort and increases patient functional ability.

Bodie’s owner, Charlie Speight, backs up these findings by explaining some of the activities that Bodie enjoys doing now that his pain kept him from doing before, “Lays on his back and stretches his legs out, lifts his leg to go (he used to squat), swims freely, runs with a normal gate and does not bunny hop, sits straight up as opposed to side-saddle, and he is off his medication.”

Charlie goes on to say that it is a bit of a mystery how Bodie ended up with hip dysplasia considering his brother shows no signs, and two of their great grandparents, Parker Sir Roberts and Salmy’s Zorro, were inducted into the ESSFTA’s Hall of Fame for field hunting.

“Having his brother is a real benefit in judging the effectiveness of Bodie’s stem cell therapy. He can run as quickly as his brother now. The boy is driven,” exclaims Charlie.

About Vet-Stem, Inc.
Vet-Stem, Inc. was formed in 2002 to bring regenerative medicine to the veterinary profession. The privately held company is working to develop therapies in veterinary medicine that apply regenerative technologies while utilizing the natural healing properties inherent in all animals. As the first company in the United States to provide an adipose-derived stem cell service to veterinarians for their patients, Vet-Stem, Inc. pioneered the use of regenerative stem cells in veterinary medicine. The company holds exclusive licenses to over 50 patents including world-wide veterinary rights for use of adipose derived stem cells. In the last decade over 10,000 animals have been treated using Vet-Stem, Inc.’s services, and Vet-Stem is actively investigating stem cell therapy for immune-mediated and inflammatory disease, as well as organ disease and failure. For more on Vet-Stem, Inc. and Veterinary Regenerative Medicine visit http://www.vet-stem.com or call 858-748-2004.