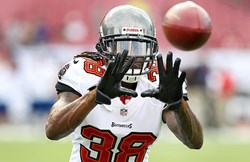 'I was impressed with Dashon’s commitment to help others,' said Haley. He was in the midst of his season and took the time to discuss his foundation and how he wants to give back to the community.

On the field, Goldson, a hard-hitting safety for the Tampa Bay Buccaneers, wants wide receivers to feel fear when they roam across the middle. It’s why he was a two-time Pro Bowler in six seasons with the San Francisco 49ers. It's also why he became one of the NFL's highest paid defensive backs this past offseason, signing a lucrative five-year deal with the Buccaneers worth $41.25 million.

“I was impressed with Dashon’s commitment to help others,” said Haley. "He was in the midst of his season and took the time to discuss his foundation and how he wants to give back to the community. He described how great it feels to give children presents who wouldn't normally have any presents under the tree.”

Opinions vary about the persona Goldson has carved as an on-field intimidator. Though the hits that have drawn fines have appeared legal, some opposing players on the receiving end have expressed displeasure while teammates and even rivals (like New England Patriots quarterback Tom Brady) rave about his penchant for old school football. Those who know Goldson off the field tell of a gentle soul who wears dreadlocks and is fashion-conscious as well as passionate about helping at-risk children.

In addition, Goldson shared his experiences growing up in Los Angeles. He talked about his football coach from Pop Warner who helped him not only on the field but also in life outside of football. Goldson is still mentored by his coach Bobby Hosea.

“Dashon made the right decision in his life by listening to his mentor," said Reynolds. "He helped Dashon become a great football player and also formed Dashon to be a leader which he is able to do on the football field and with his foundation.”

Aside from helping at-risk children, Dashon's foundation, which is called the Highest Point Foundation also helps individuals who have been incarcerated. He believes they need a second chance on life. “He has this passion to help others who need a second chance," Reynolds said. "I try to do this for veterans with Mission G. I hope to help Dashon with his foundation.”

You can listen to the interview now live at http://www.beachlifestyle.com.