In the East Tennessee River Valley, the holidays are filled with wonderful events, including special productions of classic plays, ballets, musical performances, and classic movies, many located in beautiful, restored theaters. The East Tennessee River Valley Geotourism MapGuide, a partnership in sustainable travel with National Geographic, provides information on these and other holiday events and geotourism experiences to provide families a respite during the hectic holiday season. 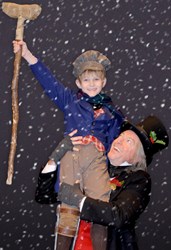 East Tennessee is a holiday destination, whether it is for shopping, concerts, parades, or special holiday events.

The iconic Tennessee Theatre has the month of December filled with festive holiday events for everyone to enjoy from films to an assortment of musical events. The theater will kick-off the Christmas season with the holiday favorite It’s a Wonderful Life on December 8 with two free showings. Doors will open an hour before the movie begins and seats are first come first serve. For those looking for a Christmas concert, on December 11 Martina McBride will be in town to perform her Joy of Christmas concert and then on December 17 The Knoxville Jazz Orchestra will perform “A Swingin’ Christmas” with John Pizzarelli. On December 20-22 the Tennessee Theatre will feature their annual showing of Miracle on 34th Street. Finally, to round out the month of December, on the 23rd the Moscow Ballet will be performing the Great Russian Nutcracker. This traditional Christmas performance sets the magical mood the day before Christmas Eve with an evening filled with colossal Christmas Trees, life-sized mice, and sparkling snow. Visiting the Tennessee Theatre is a classical tradition among many who live in and visit Knoxville during the holiday season.

“East Tennessee is a holiday destination, whether it is for shopping, concerts, parades, or special holiday events,” said Kim Davis, Senior Director of Marketing and Communications for Visit Knoxville. “One of Knoxville’s most treasured experiences during the holidays is attending one of our many theatres to take in a special holiday show or performance. From classic plays to ballets and classic movies, experiencing the holidays at a theatre in Knoxville is a tradition for many visitors and locals alike.”

Set in the heart of the University of Tennessee Campus, the Clarence Brown Theater will be performing an adaptation of the Charles Dickens classic, A Christmas Carol, from November 27 to December 22. After the second matinee performance on December 8 fans, family, and friends of the cast and crew can enjoy an intimate “talkback” session. These discussions usually last 30 to 45 giving the audience a chance to get an in depth look at the preparation behind the production. The Clarence Brown Theater is one of 13 professional theater companies nationwide associated with a university.

In downtown Chattanooga situated near Coolidge Park is the Chattanooga Theatre Centre, one of the oldest community theaters in the nation. The upcoming 2013-2014 season will be the theater’s 90th anniversary! Each year the theater company puts on a special Christmas production. This year the main event will feature a Broadway Musical style production of A Christmas Story. The show will run from December 6 through 22 and feature musical numbers based on the classic holiday movie. The theater company has performed A Christmas Story in the past, but it was a non-musical version. This year is sure to be a treat for the whole family.

In March of 2012 the beloved Princess Theatre in Harriman, Tenn. reopened after being shut down for over 12 years, and since has become a treasured gem in the historic downtown. This holiday season the Princess Theatre will be showcasing a concert on December 7 featuring performer Erica Lane in “On the Eve of Christmas.” This concert will feature holiday songs and ballads from Lane’s album “A Merry Little Christmas.” The restored Princess Theatre is known as the “largest small town theater” with over 900 seats and is vying to be added to the National Register of Historic Places.

The Palace Theater in Maryville may be known as the “little house with big shows,” but this little hometown theater is featuring some big events throughout the month of December. On December 7, award winning Robin Bullock will be hitting the stage in A Celtic Christmas showcasing her multi-instrumental talents. Then, on December 19-21 the Palace Film Club will be featuring the Christmas Classics It’s a Wonderful Life, Miracle on 34th Street, and White Christmas.

To stray away from the more traditional avenue for holiday theatre, Sweet Fanny Adam’s Theater on the Parkway in Gatlinburg will be performing the comedic "Yuletide Madness: A Holiday Celebration to Tickle Your Fancy and Jingle Your Bells." This show will be performed beginning on Thanksgiving and running through December 23. According to the Sweet Fanny Adam’s website, this show is “guaranteed to be the silliest holiday show you have ever seen” by performing the “shortest version” of A Christmas Carol and comedic adaptations of classic carols. The two-hour show will be filled with slap-stick and double takes to keep the audience laughing.

Take a look at the East Tennessee River Valley Geotourism MapGuide to learn more about these holiday events and other geotourism opportunities and find out what makes this region a National Geographic Destination. Download the free mobile app and sign up for our newsletter.

The East Tennessee River Valley Geotourism MapGuide, a partnership in sustainable travel and tourism with National Geographic, is an online planning guide to a region “Where Rivers and Mountains Meet,” from the Smoky Mountains through Knoxville, Chattanooga and North Georgia. The MapGuide is a program coordinated by the Southeast Watershed Forum, a nonprofit organization helping communities protect and enhance their land and water resources.