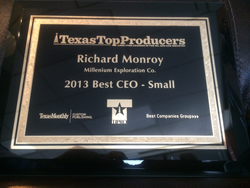 Richard Monroy, Millennium Exploration Company's President & CEO, was recognized as a finalist in Top Producer in the Best CEO category by the Texas Independent Producers and Royalty Owners Association (TIPRO). In addition to being recognized before a sold-out crowd, Monroy was also featured in the October 2013 edition of Texas Monthly.

With more than 2,500 members, TIPRO is the nation’s largest statewide association representing both independent producers and royalty owners. In 2012, TIPRO partnered with the publishers of Texas Monthly magazine to establish the Texas Top Producers awards program in order to build awareness for the unprecedented economic impact of the Texas oil and gas industry and the leaders that have directly contributed to its success. To determine award winners, the Best Companies Group (BCG), an independent polling and research company, conducted an electronic survey among professionals in the Texas oil and gas industry in the spring of 2013.

Finalists for "Best CEO" have proved to be instrumental to the growth and success of their company, and have helped generate positive results for stockholders, investors and partners over the last ten years. They have improved operational efficiency and corporate profitability, and hold a solid record of sound leadership. They also have significant experience managing company operations within Texas. The Best CEOs have been divided into three separate categories, based on their company's total production of oil and gas in Texas according to TIPRO.

Mr. Monroy stated "It is a tremendous honor to be listed among the most notable names in oil and gas". Mr. Monroy's firm is going into it's eighth year in business and, after having a record year in 2013, is looking forward to breaking new records of production in 2014.