In its ongoing effort to give back to its community, Senske Services is hosting its 11th Annual Charity Holiday Light Show while partnering with 2nd Harvest’s food distribution center in the Tri-Cities. 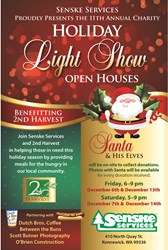 "At Senske, we are very committed to supporting our local communities throughout the year, though this event means so much more as it is the holiday season and there are many people that can and will benefit from this event," says Mosley.

The key to the success of the event lies in collecting donations of food and cash to help the needy. Included in the festivities, Senske has invited Santa Claus and his elves to be available for holiday photos for every donation received. Patt Mosley, Senske’s Director of Marketing, says Senske believes in giving back to its community and especially during the holiday season, where a little help can go a long way.

The need for food assistance in the Columbia Basin is greater than ever. One in 7 people in the Columbia Basin are hungry or are uncertain about where they will get their next meal. Last year, through its light show, Senske collected $3,329 as well as hundreds of pounds of food for the hungry. The received donations, cash and food combined, added up to approximately 5,236 adult meals. This year, Senske has even more help with several local businesses joining in the effort to support those in need this winter season.

Dutch Bros. Coffee will be on-site with homemade hot chocolate, donating 50% of all proceeds directly to 2nd Harvest. Between the Buns Hot Dog & Sausage Restaurant - rated the 3rd best place to get a hot dog in the US by Esquire Magazine in April this year - will also be at the event, donating to 2nd Harvest $0.50 per hot dog sold. In addition, longtime Senske neighbor O'Brien Construction will be graciously donating the use of its gravel lots for families to park and enjoy the show. Scott Butner Photography will be donating his time to photograph families with Santa, and Stripe Rite, a full-service pavement marking company, will be generously donating large reader boards to assist with traffic control.