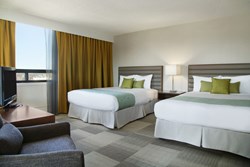 The Coast Inn of the North has been a long-time favorite in Prince George. These improvements show our ongoing commitment to delighting our guests.

From textured wallpapers to soothing tone on tone colour palettes in the new guest rooms, and pops of the brand’s signature purple in hallways and on door markers, rooms are sure to soothe and delight the senses, and provide the ideal home base for travelers. Some premium rooms offer luxurious soaker tubs, and suites are large and spacious.

Judy Henderson of Vancouver based Inside Design Studio Inc. brought owner Okabe North America’s vision to life, with Scott Construction acting as general contractor on the project. The scope of the renovation included a full update of 99 of 159 guest rooms including 47 superior and 32 premium room types with new bathrooms, carpets, window coverings and wall finishings. As at all Coast Hotels, triple sheeting and complimentary high speed Wi-Fi come standard with every stay.

As the Prince George community celebrated during the recent unveiling party, Coast Hotels president Robert Pratt announced phase two of the renovations. A further $2.9 million will complete the remainder of the guest rooms and some public space enhancements in 2014.

“The Coast Inn of the North has been a long-time favorite in Prince George. These improvements show our ongoing commitment to delighting our guests. We believe our sleek new guest rooms coupled with our proven service make the hotel the property of choice in the market” said Shu Naito, Senior Vice President of Coast Hotels and Vice President of property owner Okabe North America.

About The Coast Inn of the North
A Prince George favorite, the Coast Inn of the North offers newly renovated guest rooms, a preferred downtown location, elegant meeting facilities in the largest on-site conference centre in the area, pool and fitness centre, specialty liquor store, and two restaurants including the city’s only authentic Japanese teppanyaki steak house. All guests enjoy complimentary high-speed in-room Wi-Fi because Coast believes everyone deserves to stay connected.