Ticket Down (http://www.ticketdown.com) announces that they have slashed ticket prices across the board for Wicked the Musical at the Gershwin Theatre in New York, Oriental Theatre in Chicago, Benedum Center in Pittsburgh, State Theater in Cleveland, Orpheum Theatre in Memphis, Bass Concert Hall in Austin, Sheas Performing Art Center in Buffalo, Procter and Gamble Hall (Arnoff Center) in Cincinnati, Sacramento Community Center Theater in Sacramento and Orpheum Theatre in Omaha. This popular secondary ticket exchange is offering the special customer appreciation code DISCOUNT for special savings. 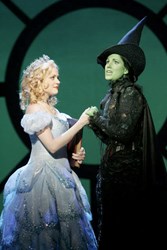 Ticket Down announces that they have lowered prices across the board for all 2013 Wicked the Musical tickets. This popular secondary ticket exchange is extending the exclusive customer appreciation promo code DISCOUNT for special savings.

Wicked Tickets are selling fast but you can still reserve yours and see the spectacular production of this classic and well-loved production. Wicked has been showing long-term at the Gershwin Theatre in New York City and the show travels to many other markets throughout the year.

Wicked: The Untold Story of the Witches of Oz was based on Gregory Maguire's novel and was narrated from the perspective of the Land of Oz' witches. The original production premiered at the Gershwin Theatre on Broadway in October 2003. It is the 12th longest running show in Broadway's history.

The musical is the story of Elphaba, the Wicked Witch of the West. The story revolves around the question "Is evil really just a point of view?" presented through a lineup of memorable songs and delightful characters.

The musical began with Glinda's address announcing to the people of Munchkinland the death of the Wicked Witch of the West and started reminiscing about the time she spent with Elphaba studying magic. Glinda met Fiyero and they dated to the dismay of Elphaba. Elphaba then found new friends and went to the Emerald City to complain to the Wizards the injustices committed against the human-like Animals of Oz. Elphaba discovered what the Wizard was doing and vowed to fight him. She stole his spell book and escaped, asking Glinda to come along but she refused.

The Wizard made the people think that Elphaba was a witch but Glinda did not stop the rumors. Fiyero Glinda to find Elphaba and they enjoyed a short-lived romance until the Wizard's men trapped her. Elphaba escaped to the western part of Oz where Dorothy followed to kill her. Glinda sought Elphaba to warn her and they became friends once again. Elphaba had to face Dorothy.

Ticket Down delivers tickets to sold out concerts and events worldwide when no one else can, and they do so at discounted prices. As a member of TicketNetworkDirect, they can guarantee the delivery of tickets on time for sporting events, NASCAR, NBA, NFL, and NHL. This popular ticket exchange has cheap Wicked Tickets along with discounted tickets for all other current Broadway shows.