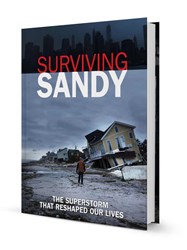 Proceeds from the purchase of 'Surviving Sandy' have already gone to Tunnel to Towers, New York Says Thank You, The FDNY Foundation, The New Jersey Relief Fund, and The American Red Cross.

The anniversary of Superstorm Sandy, one of the strongest and most powerful storms to ever hit the East Coast, has passed, and yet the rebuilding of shattered lives and communities continues.

Last week, two huge billboards appeared on the New Jersey Turnpike promoting the “Gift of Giving” in the form of a masterful book about the storm, published as a labor of love by the students, parents, and friends of the Pascack Valley Learning Center.

"Surviving Sandy: The Superstorm that Reshaped Our Lives" is being sold through Barnes & Noble and other bookstores, as well as online at survivingsandybook.org. Since 100% of the proceeds from the sale of this book go to charity, anyone buying the book as a gift is not only giving a very valuable and interesting piece of history, but also giving to the charities active in the rescue, recovery, and rebuilding efforts.

"Surviving Sandy" describes the storm from its innocuous birth in the Caribbean to its fearful landfall in Atlantic City and beyond. The book has been featured on Fox 5 and WPIX. It has been autographed by Governor Christie and former Mayor Rudolph Giuliani, and it has already resulted in donations to Tunnel to Towers, New York Says Thank You, the FDNY Foundation, The New Jersey Relief Fund, and the American Red Cross.

We urge anyone driving by Exit 15 on the Turnpike or entering the Lincoln Tunnel, to remember to add this beautiful and once-in-a-lifetime publication to their list of holiday gifts, and do their part towards rebuilding the New York and New Jersey Shores.