On Dec. 13, Dutch Bros. Coffee gives away free drinks at a new location in the Gilbert, Ariz., Heritage District. 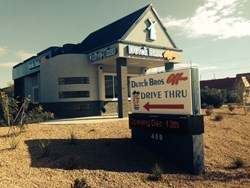 On Friday, Dec. 13, from 5 a.m. to 10 p.m., Dutch Bros. Coffee Drive-Thru is giving away free drinks all day at 459 N. Gilbert Rd. to celebrate its new location in the Gilbert Heritage District.

The Gilbert Town Council unanimously approved a code change in January to allow the drive-through to open in the downtown district where previously there was a struggling auto shop.

Local owner-operator Jim Thompson, who owns twelve other Dutch Bros. stores in the valley, says, “We are beyond excited to open a second Gilbert store and expand our platform for giving back to the community.”

The new location will be open 5 a.m. to 10 p.m. Sunday through Thursday and 5 a.m. to 11 p.m. on Fridays and Saturdays. To find the Arizona Dutch Bros. Coffee location nearest you, visit http://www.dutchbros.com/locations.

Expansion goals include no less than 20 locations throughout the Phoenix metropolitan area, all while focusing on maintaining and enhancing the overall experience for customers.