Broadway Tickets Act Up on BuyAnySeat.com

Six Broadway shows hit 100 percent capacity or more during the Thanksgiving week, based on data tracked on BuyAnySeat.com. For the week ending December 1, The Book of Mormon, Spider-Man, Pippin, Matilda, Kinky Boots and Betrayal all scored in triple digits with theatre-goers. 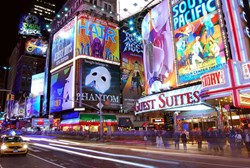 Broadway’s traditional Holiday appeal lives on as The Book of Mormon, Spider-Man, Pippin, Matilda, Kinky Boots and Betrayal all hit over 100 percent capacity during Thanksgiving week.

Tis the season for Broadway, and ticket sales are bountiful. Theatre-goers are celebrating the Holidays once again by attending Broadway shows.

“Currently, there are 46 productions performing on Broadway,” said Marta Ault at online ticket marketplace BuyAnySeat.com. “Broadway tickets are very popular during the Holiday season and are one of New York City’s primary tourist attractions.”

“That’s why we’re proud to be able to offer theatre-goers the most complete and continuously updated selection of tickets, with a worry-free guarantee to protect their purchase,” said Ault.

“To access the complete inventory of Broadway tickets we now have available, customers can go to BuyAnySeat.com and click on the production they want to see – then select their tickets.”

The Book of Mormon ranked at the top with 102.6 percent, and has played to capacity since it opened at the Eugene O’Neill Theatre in 2011. From the creators of "South Park", the irreverent story concerns two mismatched missionaries sent to Africa to spread the good word – with R-rated results.

Critics describe the musical as scandalous yet ultimately satisfying. Winner of nine Tony Awards, including Best Musical, the production has received a near perfect 4.9 rating out of five from audiences.

Ranked second for the week at 101.3 percent capacity for the week ending December 1, Spider-Man: Turn Off The Dark is playing at the Foxwoods Theatre. Running since November 2010, this spectacular musical is about Marvel's magnificent superhero.

The Daily News writes that the play "is more cohesive, streamlined and funnier than before," and the "acrobatic aerial stunts and flying... are dazzling". Audiences are equally impressed, giving the production 3.9 out of five stars.

Pippin, at 100.7 percent capacity for the week, is playing at the Music Box. Running since March 2013, this magical `coming-of-age’ musical features songs by "Wicked" composer Stephen Schwartz and direction by Tony-nominee Diane Paulus.

Back on Broadway for a 40th anniversary revival, Pippin tells the story of a young prince on a death-defying journey to find meaning in his life. Earlier this year, the play won four Tony Awards, including Best Revival of a Musical. Audiences give it another near perfect rating of 4.9 out of five.

Three other productions scored above 100 percent capacity for the week, including Matilda at the Shubert with 100.8, Kinky Boots at the Hirschfeld with 100.6 and Betrayal at the Barrymore with 100.0.

In addition, eight productions scored above 90 percent capacity, including: Wicked at the Gershwin, Twelfth Night at the Belasco, Phantom of the Opera at the Majestic, The Lion King at the Minskoff, Once at the Jacobs, Newsies at the Nederlander, Motown at the Lunt-Fontanne and Annie at the Palace.

Broadway is a street in Manhattan, where 40 professional theatres of 500 or more seats are located in the Theater District and Lincoln Center. Along with London's West End, Broadway is considered to represent the highest level of commercial theatre in the English-speaking world.

The Broadway Theater District is one of New York City’s most popular tourist attractions, ranking at the top with the Statue of Liberty and Empire State Building. According to The Broadway League, Broadway shows sold approximately $1.081 billion in tickets in calendar year 2012, compared with $1.037 billion for 2010. Attendance in 2012 stood at 12.13 million, compared to 12.11 million in 2010. The League also reports that about 62 percent of all Broadway tickets were purchased by tourists in the 2010–2011 season.