This book—The Covenants of the Prophet Muhammad with the Christians of the World by Dr. John Andrew Morrow [Angelico Press/Sophia Perennis, 2013]—could change the course of Christian/Muslim relations. As a result of researching sources from obscure monasteries, ancient archives, and private collections, the author uncovered the Prophet’s treaties with Christians; they uniformly state that Muslims are not to attack peaceful Christian communities, but defend them “until the End of the World.” 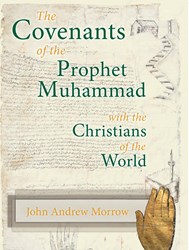 Now that Christians are being persecuted in Syria and elsewhere by extremists who present themselves as Muslims while receiving aid from the U.S. (New York Times, September 10, 2013, http://www.nytimes.com/2013/09/11/world/middleeast/assault-on-christian-town-complicates-crisis-in-syria.html), this book could not be more timely. According to the author, if the documents brought to light in this book were known to the American people, and to Muslims around the world, the “clash of civilizations”—really a clash of barbarisms—might give way to a recognition that the religions face a common enemy dedicated to destroying them both. Already respected scholars and authorities from all over the Muslim world have taken notice of this ground-breaking work. (View endorsements at http://www.youtube.com/watch?v=-zxE_U1PjA8)

Ever since the 9/11 attacks and the Boston Marathon bombing, informed and conscientious Muslims have been shouting out: “we are not all terrorists!”, and searching for a way to effectively counter the extremists in the name of the traditional shari’ah. (See overview: http://www.patheos.com/Books/Book-Club/John-Andrew-Morrow-Covenants-Prophet-Muhammad.html) This book confirms the rulings of the true shari’ah—not its extremist perversion—on the treatment of non-Muslims based on newly-rediscovered documents that record Muhammad’s actual words; it also contains The Covenants Initiative where Muslims can sign a declaration accepting these treaties of Muhammad as legally binding on them today. (To view the Covenants Initiative, and the covenants themselves, click on http://www.covenantsoftheprophet.com) This Initiative, which has already been signed by people from all walks of life, gives Muslims a way to stand in solidarity with peaceful Christians now under attack by corrupt and misguided terrorists who claim to act in the name of Islam in the Mid-East, Africa and other parts of the world.

The Covenants of the Prophet Muhammad with the Christians of the World contains much difficult-to-obtain material: facsimiles of primary sources in Arabic and Persian; corrected versions in modern Arabic typescript; and alternate translations. Scholars now have all they need to study the covenants of the Prophet in depth. This book will almost certainly open a new field of action in Islamic studies, the antiwar movement, and interfaith relations.

“This narrative has the power to unite Muslim and Christian communities. A work of scholarship, its release is timely, and its content critical in fostering mutual respect and religious freedom.”—IMAM FEISAL ABDUL RAUF, Chairman, Cordoba Initiative

“In his indispensable contribution to the study of the Abrahamic faiths, John Andrew Morrow tells the story of how the Prophet Muhammad used his desert experiences of hospitality and protection to bring Muslims and Christians together.”—JOSEPH HOBBS, University of Missouri

“These letters from the Prophet Muhammad to Christian communities can serve to inspire both Muslims and Christians about our ability to live together as God's people, as friends, as neighbors, and as custodians of the same small planet.”—OMID SAFI, University of North Carolina

“Covenants is a genuine call for reconsidering the relationship among the three revealed Abrahamic faiths of Christianity, Judaism and Islam.”—AMAR SELLAM, Mohamed I University

“This book documents what is possibly the third foundational source of Islam: the Prophet’s treaties and covenants among people of the Abrahamic faiths.”—BRIDGET BLOMFIELD, University of Nebraska

“One of the most important projects related to Muslim-Christian relations in recent decades.”
—ZACHARY MARKWITH, Graduate Theological Union

JOHN ANDREW MORROW has served as a faculty member and administrator at numerous colleges and universities; his books include Arabic, Islam, and the Allah Lexicon: How Language Shapes our Conception of God (Edwin Mellen, 2006), Religion and Revolution: Spiritual and Political Islam in Ernesto Cardenal (Cambridge Scholars Publishing, 2012), and Islamic Images and Ideas: Essays on Sacred Symbolism (McFarland, 2013).

The imprint ANGELICO PRESS/SOPHIA PERENNIS combines the resources of Angelico Press, committed to conserving the essentials of Catholic Tradition while also promoting mutual understanding among peoples of the Abrahamic faiths, with those of Sophia Perennis, which for nearly two decades has been in the forefront of publishing works illustrating the common bases of all the world’s religions.