(Pax Stereo Tv) The worldwide NeoUrban community, already mourning the loss of South African President Nelson Mandela, takes time to also say goodbye to poet and Watts Prophet Richard Dedeaux. Considered to be the "original rappers" along with their east coast counterparts the Last Poets, the Watts Prophets are the most influential group that you probably never heard of. 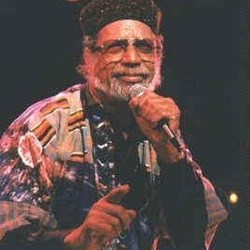 The Watts Prophets are the most influential group that you probably never heard of.

In a world still reeling with the loss of world treasure Nelson Mandela, a member of one of the most influential groups in musical history quietly passed away. After a long battle with cancer, poet and founding member of the legendary Watts Prophets, Richard Anthony Dedeaux passed away at home in Shelton, Washington at 10:45 PM PST, Tuesday night, December 3rd.

Originally from New Orleans, Richard moved to Los Angeles with his father and two brothers after the death of his mother in 1953. He was married by age nineteen and raising a family in Los Angeles when his journey with poetry began. Along with Amde Hamilton and Otis O'Solomon, Richard Dedeaux formed the Watts Prophets after meeting at the historic Watts Writer's Workshop, a community rebuilding effort born out of the 1965 Watts Rebellion. Supported by Budd Schulberg, Academy Award winning screenwriter for "On The Waterfront", the Watts Writer's Workshop provided an opportunity for locals to express themselves and their culture by encouraging art and literacy. It was out of this creative environment that the Watts Prophets were born.

The early works of the three poets were a unique combination of performance poetry, percussive rhythms, and jazz, and were an expression of rage against the racism and poverty that was the day to day reality for most African Americans at that time. This provided the foundation for a unique style that many acknowledge today as the earliest roots of rap. Two albums from the 70's, "Rappin' Black In A White World" and "In The Streets Of Watts", while nearly impossible to find, continue to be recognized and prized as rap history. Well known rapper DJ Quik, a collaborator and contributor to the Watts Prophets 1997 work "When The 90's Came", is one of the many who point to the Watts Prophets as an early source of inspiration. Creating a voice tightly woven with the day to day struggle toward civil rights for African Americans, the Watts Prophets were eventually heard in recordings with popular music legends such as Stevie Wonder and Bob Marley, and have been sampled by artists such as Digable Planets, Coolio and Ice Cube.

Current plans for a memorial service in Los Angeles are being finalized, with announcements expected shortly. Internet television gurus Pax Stereo have created and are maintaining an online memorial for Richard Dedeaux at http://www.richarddedeaux.com. Also in honor of the passing, now available at the website are free downloads of Richard Dedeaux's solo CD project "Afterthoughts", recorded in 1997 with the Hemsley Foster Project. The CD was recorded, and mixed by collaborator and producer Mario Hemsley in the early days of the Pax Stereo studios.