Humanix Books released a new biography, "Francis: A Pope for Our Time, The Definitive Biography." Pope Francis was just named Person of the Year by Time magazine. 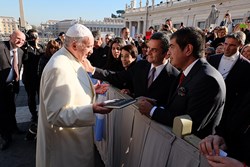 Rarely has a new player on the world stage captured so much attention so quickly.

Time Magazine has picked Pope Francis as its 2013 Person of the Year, with the popular pontiff beating President Barack Obama, Republican Sen. Ted Cruz, and several others for the top honor.

"Rarely has a new player on the world stage captured so much attention so quickly," said Time Magazine Managing Editor Nancy Gibbs Wednesday. "In his nine months in office, he has placed himself at the very center of the central conversations of our time: about wealth and poverty, fairness and justice, transparency, modernity, globalization, the role of women, the nature of marriage, the temptations of power."

The pope's message is also spreading to people beyond the church, said Gibbs.

"When he kisses the face of a disfigured man or washes the feet of a Muslim woman, the image resonates far beyond the boundaries of the Catholic Church," Gibbs wrote in a piece explaining the magazine's selection.

Known as the “Black Pope” (for his Jesuit garb), the “Pope of the Poor,” and the “Third World Pope,” such monikers exemplify Pope Francis’ commitment to society’s most underprivileged and disenfranchised. In the new book release, “Francis: A Pope for Our Time,” the authors bring clarity to the man and his work: his dedication to interreligious dialogue, accessibility to his community, and rejection of lavish excess in favor of simplicity that promises to bring real-world leadership to a modern Church desperate to emerge from old-world precepts.

Francis was chosen over all the others, for many reasons, noted Gibbs, including his powerful message of "don't just preach; listen. Don't scold; heal."

Francis: A Pope for Our Time, The Definitive Biography, incisively chronicles Pope Francis’ ancestry, youth, call to faith, humble beginnings in the Society of Jesus, and rise through Argentina’s ecclesiastical ranks, all the way to the Vatican. The book emphasizes His Holiness’ Jesuit background of humility, poverty, and service that stands to reform the Vatican’s long history of lavish excess and removed, otherworldly style of leadership.

Francis: A Pope for Our Time, The Definitive Biography, is published by Humanix Books and can be found at booksellers everywhere.