"Abraham Lincoln and the Technology of War" will be on display in Washington, D.C. January 14-July 6, 2014. 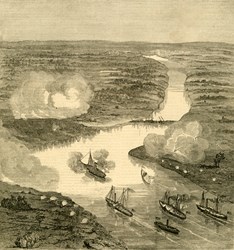 Among the new technology first utilized for combat during the Civil War were balloon flights by the Union Army for charting Confederate army positions and observing battle preparations.

Possessed of a brilliant analytical mind, President Lincoln knew that the North's industry -- far superior to the agrarian South -- was a key to victory.

Lincoln Memorial University’s (LMU) Abraham Lincoln Library and Museum (ALLM) has been invited to display “Abraham Lincoln and the Technology of War” at the Ford’s Theatre Center for Education and Leadership (514 Tenth Street NW) in Washington, D.C. Curated by Steven Wilson, ALLM curator and assistant director, the exhibit investigates the significance of inventions and new machines in the Civil War.

The Civil War began as a struggle of righteousness between two groups of, for the most part, amateur soldiers. It ended with the realization that weapon superiority equals or transcends tactics and death is the ultimate victor on the battlefield.

Abraham Lincoln viewed technology as a means to defeat the enemy. Possessed of a brilliant analytical mind, the President knew that the North’s industry – far superior to the agrarian South – was a key to victory. Lincoln was also fascinated by machines of all kinds, and understood the potential of technology. Each new weapon might hold the power to shorten the war and save the Union.

Included in the exhibit are artifacts from the B&O Railroad Museum, the Kentucky Military History Museum, the National Firearms Museum, the Center for Northern Indiana History, the Tennessee State Museum and the Vicksburg National Military Park-U.S.S. Cairo. Some rare items from the collection of the ALLM are a Greene bolt action breech-loading rifle, Captain John Worden’s speaking trumpet and a collection of carte de visite photographs.

“Abraham Lincoln and the Technology of War” opens to the public January 14, 2014, and will remain on display through July 6, 2014. The exhibition is open 9 a.m.-5:30 p.m. daily. Admission is included with regular daytime visit tickets to Ford’s Theatre, which is free but requires timed entry tickets. Tickets may be reserved in person at Ford’s Theatre Box Office (511 Tenth Street NW, Washington, DC), through Ticketmaster at 800.982.2787 or online at http://www.fords.org. Ticketmaster fees apply. Groups of 15 or more may reserve tickets by calling 202.638.2367. The University will host a special reception at Ford’s Theatre on February 10, 2014, while LMU officials are in the capital region for festivities surrounding Lincoln’s birthday.

This exhibition explores how cutting-edge Civil War technological innovation captured the fascination of President Abraham Lincoln and impacted the conduct of the war. Our nation’s first “wired” president, Lincoln spent hours at the War Department Telegraph office monitoring the progress of battles through messages from his generals. He test-fired new weapons like the seven-shot repeater Spencer rifle, believed the ironclad U.S.S. Monitor held great promise for improved naval warfare and even expressed interest in riding a hot air balloon aloft. A man of innovation and imagination – he is the only U.S. president to hold a patent – Lincoln investigated any invention that held the potential to help make the shattered nation whole again.

The Abraham Lincoln Library and Museum is located on the historic campus of Lincoln Memorial University in Harrogate, Tenn. Housing one of the top five Lincoln and Civil War private collections in the world, the Museum is open Monday-Friday from 10 a.m. to 5 p.m., Saturday from noon to 5 p.m. and Sunday from 1 p.m. to 5 p.m. For more information about this and other programs at the Abraham Lincoln Library and Museum, call 423-869-6235.