The physical symptoms of Premenstrual Syndrome may not be pleasant, but a study conducted by Queendom.com and PsychTests.com with their PMS Test indicates that the emotional impact can be much more debilitating. 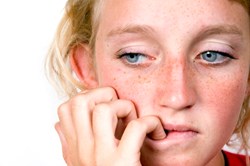 Emotional symptoms of PMS tend to be the most difficult to manage.

It's important to understand that women don’t intentionally lash out or use PMS as excuse to do so.

Cramps, bloating, and acne will often leave women wanting to curl up on their couch for a week each month, but according to 1,893 women who took Queendom.com’s PMS Test, the physical impact of Premenstrual Syndrome is not as painful as the emotional one. When there are websites dedicated entirely to taking a light-hearted look at PMS (jokes and quizzes included), it’s an attempt to find humor, camaraderie, anything – to help add meaning to an often misunderstood and chaotic time in women’s lives.

A study conducted by Queendom.com attempted to understand the aspects of PMS that tend to be the most problematic. PMS and PMDD (Premenstrual Dysphoric Disorder, a more severe and debilitating form of Premenstrual Syndrome) are not officially part of the DSM-IV, the diagnostic manual of psychological disorders. Yet, for many women, it’s the fluctuations in mood and thinking that tend to cause the most difficulties.

Assessing various symptoms and their level of severity, Queendom’s analysis of nearly 2,000 women reveals that:

“Initially, it seemed that the level of severity, as reflected in the average scores was not extremely worrisome,” points out Dr. Jerabek, president of the company. “However, when we started to dig deeper and analyze women’s responses to individual questions, we started to see a different picture. For example, only 20% of women rated their overall PMS symptoms as mild; 47% rated them as moderate. There is, however, another 33% of women who rated their experience as severe – that’s one third of our sample whose symptoms are so bad that it affects their life to a debilitating degree. And when we analyzed which area of women’s lives is most impacted by PMS, it was relationships that came out on top. In addition, 8% of women admitted that they’ve had a relationship end due to their difficulties with PMS, and another 12% said that while it wasn’t the only cause of conflict, it was a contributing factor in a break-up. This is a cause for concern,” explains Dr. Jerabek.

When dealing with PMS…

“We understand that PMS is often the butt of many jokes, but for some women, there is little humor in it,” explains Dr. Jerabek. “I don’t endorse adding it to the DSM as an ‘official’ mood disorder. However, it is important to understand that women don’t intentionally lash out or use PMS as excuse to do so. Education, some lifestyle changes, and a little more understanding and empathy can go a long way,” concludes Dr. Jerabek.

Interested in finding out more about your PMS symptoms? You can take the PMS Test at: http://www.queendom.com/tests/take_test.php?idRegTest=3232