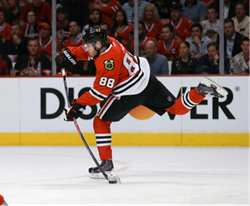 Patrick Kane leads the high flying Chicago Blackhawks with 17 goals this season, as the storied squad tops the league with a 23-6-5 record and 129 goals scored.

When you’re hot, you’re hot. Thirty four games into the 82-game regular season, the defending NHL champion Chicago Blackhawks are flying high at the top of the power rankings once again.

The Blackhawks own the best record in the league at 23-6-5 as they steam through December. They also own the league’s best offense with 129 goals so far this season. That’s 21 more than the next highest-scoring team, the Anaheim Ducks at 108.

“The Blackhawks are dominating the league both on the ice and at the ticket booth,” said Marta Ault at online ticket marketplace BuyAnySeat.com.

“The Blackhawks are making a run at the Stanley Cup again this year, and fans are all in. That’s why we’re proud to offer fans the most comprehensive and continuously updated selection of sports tickets online, with a worry-free guarantee to protect their purchase.

“To access the full line-up of NHL Hockey tickets now available, customers can go to BuyAnySeat.com and click on the NHL Header, then select their team and their tickets,” added Ault.

After three straight losses to start the month of December, Chicago has bounced back quickly. Coming off their third win in a row, Chicago’s’ offense is soaring. The team went off for seven goals against the Flyers on Wednesday night en route to an impressive 7-2 win.

The Blackhawks look to continue their winning ways against the Toronto Maple Leafs and Los Angeles Kings this weekend, as they are just two points ahead of the Anaheim Ducks for control of the conference.

Chicago dominated the Stanley Cup finals last June, and have won five Stanley Cup championships since their founding in 1926. The Blackhawks are also one of the original six NHL teams along with the Red Wings, Canadiens, Maple Leafs, Bruins and Rangers.

Other key NHL matchups this weekend include the Minnesota Wild taking on the Colorado Avalanche in Denver and the Detroit Red Wings hosting the Pittsburgh Penguins at Joe Lewis Arena.