Ticket Down (http://www.ticketdown.com) announces that they have slashed ticket prices across the board on all upcoming performances of the popular musical, The Book of Mormon. After a highly successful run in New York City, "The Book of Mormon" is going on a traveling tour to these exciting cities and venues in late 2013 and the first part of 2014: Eugene O'Neill Theatre in New York City, Pantages Theatre in Los Angeles CA, The Smith Center in Las Vegas, Boston Opera House in Boston MA, Au-Rene Theater - Broward Center For The Performing Arts in Fort Lauderdale FL, Orpheum Theatre in San Francisco CA, Belk Theatre at Blumenthal Performing Arts Center in Charlotte NC, Procter & Gamble Hall (Aronoff Center) in Cincinnati OH, Fabulous Fox Theatre in Atlanta GA and Forrest Theatre in Philadelphia PA. 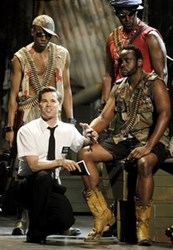 Ticket Down has an impressive inventory of discount tickets for The Book of Mormon available for sale. This award winning production began a traveling tour this past August. Residents of cities fortunate enough to host this phenomenal production should reserve their seats as soon as possible. This popular secondary ticket exchange is extending their exclusive customer appreciation promo code DISCOUNT or special savings on any ticket order.

The Book of Mormon originally opened at O’Neill Theatre in New York City on March 24, 2011. The Book of Mormon is a unique musical directed by two brilliant directors named Parker and Casey Nicholaw who took every aspect of the Broadway production very seriously. From the selection of cast to the composition of the music, every small detail ended up being worked on until it was right. The book of Mormon describes the story of two missionaries who stumble upon an Ugandan village. The finest quality of the musical is the unusual way in which three distinct topics, Religion, AIDs and The Lion King have been brought together. The mockery of these topics enables the musical to offer plenty of laughter to spectators. The directors wanted "The Book of Mormon" to put forward some cynical and at the same time some hopeful material that could have a long lasting impact on the audience.

"The Book of Mormon," like other Broadway musicals, has attracted a large amount media attention and coverage. Nonetheless, the Church of Jesus Christ of Latter Day Saints issued this statement: "The production may attempt to entertain audiences for an evening, but The Book of Mormon as a volume of scripture will change people’s lives forever by bringing them closer to Christ."

One critic, Charles McNulty, has given varied remarks about the musical. According to him, the boldness and audacity that this musical portrays can only be expected from the maker of "South Park: Bigger, Longer & Uncut." Despite the newness of musical compositions and storyline, the musical still sometimes gives a feel of old-fashioned and familiar comedy that you have been used to since your childhood. Several newspapers and magazines have honored the production by describing in words like "pleasure-giving" and "humorous." Ben Brantley who is a highly respected theatre reviewer had these words about the production, "And for combining polish, enthusiasm and individuality, the ensemble is the best in a musical since Susan Stroman’s team for "The Producers."" A Hollywood reporter said that after attending this Broadway musical, you have the opportunity to serve your inner soul with the original and fresh music. The sweetness of the show is what makes it distinct and apart from other musicals.

"The Book of Mormon" is presented in more of a classical mode. The unique aspect of this play is that it matches the fantasies of The Lion King, idealization of religion and spiteful reality. Though several people rose their eyebrows over the musical’s attempt to scoff at religion, numerous patrons have praised the true boldness featured throughout the Broadway show. The enjoyable music was written by several talented names including Parker, Stone, and Scatological. According to Parker when you try to present the attitudes of society, it becomes very difficult to convince religious devotees. They leave no stone unturned to give you reasons of warlord’s threatening warning to the women of the village.

The sets and complete stage interior turned out to be phenomenal after long hours of exertion and hard work. This musical is fun to watch, despite all the controversies that it has given birth to. The appearance of actors and actresses is also stunning as they seem to be well trained for their role in this musical. The costumes have been designed to match the bold theme of the musical and they also enhance the interest of the audience in the story of the show.

Ticket Down has discounted tickets for The Book of Mormon along with sold out tickets for virtually every imaginable event worldwide. Contact this popular website's customer service desk daily from 7 a.m. to 1 a.m. EST at 1-877-870-3653 with any questions.