Groundbreaking Set for The Meadows at Historic Castle Rock

Mixed-use Town Center Project Gets a Green Light After Being on Hold Since Early 2008; Mirrors Economic Downturn and Recovery 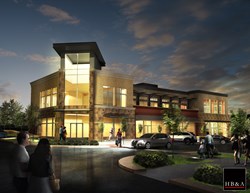 The timing couldn’t be better to launch the first centralized retail/restaurant pedestrian neighborhood for The Meadows.

Local developers Tim White and Doug Decker, business partners of successful metro-Denver projects such as The Source in RINO and Freight at Taxi in downtown Denver, announced today they are breaking ground on the first of two commercial buildings in the mixed-use Town Center in The Meadows at Historic Castle Rock.

The combined 24,000-square-foot buildings, will feature boutique retail, office, and restaurants. The first phase of the two buildings is slated for completion in August 2014, and phase two will be delivered as soon as late 2014, or early 2015.

“The Meadows Town Center project has been a microcosm of the economy the last few years,” said Tim White, investor. “We were delayed when the economy soured in 2008 and we’re poised for success now that it’s turned around—especially here in Denver South. This project is especially meaningful, since it was the first joint venture for Doug and me when we joined forces back in 2008, to help build this important community. The Town Center has been long-awaited by everyone in and around Castle Rock, but it was that much more anticipated by those of us who personally invested in the project to grow the very community where we’ve worked and lived in all of our lives.”

According to a recent South Denver Economic Development Partnership economic environment report, the area has experienced a more robust economic recovery compared to the rest of the state. Denver South experienced a 6.3 percent job growth—nearly twice as high as the Denver metro area average.

“The timing couldn’t be better to launch the first centralized retail/restaurant pedestrian neighborhood for The Meadows,” said Jim Riley, president of Castle Rock Development Company, the master developer for The Meadows at Historic Castle Rock. “And, like the Stapleton and Lowry Town Centers, it will serve far more than just the surrounding 55,000+ residents. The existing nearby retail—such as the Outlets at Castle Rock—is already a tremendous draw from across the metro area.”

The Town Center at The Meadows is located just two miles east of I-25, near the Castle Rock Outlets, which ranks in the top-10 most-visited attractions in Colorado.

HB&A is the architectural firm who designed the structures, and will ensure the buildings meet all energy code requirements of the 2012 International Building code. White Construction Group will build the town center buildings. Newmark Grubb Knight Frank is the leasing agency and can be contacted for information about rates and availability.

About The Meadows at Historic Castle RockTM
An extension of historic downtown Castle Rock, The Meadows master-planned community sits lightly on the land with some of the most stunning views of ridgelines and vistas in Colorado. The community offers 1,100 acres of public land including parks, schools, open spaces and more than 24 miles of trails, including over 7 miles of natural trails. The “Out West” experience that comes from being nestled in the foothills of the Rocky Mountains is balanced by being only a short commute from the Denver Tech Center and downtown Denver. Six homebuilders offer new homes ranging in price from the high $100,000s to the mid $500,000s.

For more information about The Meadows, visit http://www.MeadowsCastleRock.com.
###