Hampton Lake, the award-winning Bluffton community, will close out 2013 with unprecedented sales and a solid vision for the future. 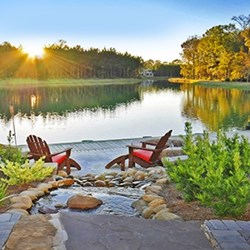 “We are thrilled that so many families have decided to call Hampton Lake home,” said Pratt Reed, President of the community. “It is a reflection on our beautiful homes as well as the neighborhood's award winning amenities and active social calendar.“

As of December 15, the private community has 167 sales, 58 homes currently under construction and an additional 48 have been built during the year. Moreover, based on sale inquiries, Hampton Lake officials anticipate more sales before the end of the year. “We are thrilled that so many families have decided to call Hampton Lake home,” said Pratt Reed, President of the community. “It is a reflection on our beautiful homes as well as the neighborhood's award-winning amenities and active social calendar.”

This sales report is especially noteworthy because Hampton Lake, LLC, the development entity of the Hampton Lake community, reorganized its debt structure last spring. At that time, community officials promised it would be “business as usual.” They lived up to that pledge and worked diligently during 2013 to not only safeguard its employees’ jobs, but to also ensure a solid future for sellout of Hampton Lake. “When we reorganized our debt structure earlier this year, our two main goals were to take care of our employees and our residents, and to continue our efforts to build up and build out the community. We accomplished both of those objectives. We look forward to another successful year in 2014,” said Mr. Reed.

Construction on Hampton Lake began in 2006. Since that time, it has grown into a flourishing, family-friendly community complete with a 165-acre freshwater lake, pools, clubhouse, workout facility, spa, dog park and boating facility. In 2008 and 2009 respectively, it was named “Best Community Facility, 151 Homes and Over” and “Best Community, 151 Homes and Over” by the National Association of Homebuilders and Professional Builder Magazine.