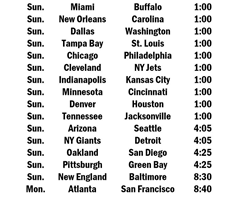 The penultimate week of the 2013 NFL schedule is here and teams are making their final push for the playoffs.

The penultimate week of the 2013 NFL schedule is here and teams are making their final push for the playoffs. The Week 16 schedule is highlighted by important divisional clashes, including an NFC South showdown featuring the New Orleans Saints and Carolina Panthers.

To get fans ready for the upcoming slate, PrintableBrackets.net is offering fans the complete printable Week 16 schedule.

“It’s almost hard to believe that there’s only two weeks left in the regular season,” said PrintableBrackets.net spokesperson Zaniel Worth. “No game looms larger on the Week 16 schedule than the matchup between the Saints and Panthers.”

Both teams enter the matchup 10-4 on the season, but the Saints hold the tiebreaker after posting a 31-13 win over the Panthers in Week 14. New Orleans can clinch the division title and a first-round bye with a win, while the Panthers can secure a playoff spot with a victory.

Printable Brackets has the full Week 16 schedule, which features several other notable games. The Seattle Seahawks have the opportunity to lock up home-field advantage throughout the playoffs when they host the 9-5 Arizona Cardinals. The New England Patriots can wrap up the AFC East with a win over the defending Super Bowl champion Baltimore Ravens.

Division leaders will collide when the Philadelphia Eagles host the Chicago Bears on “Sunday Night Football.” The San Francisco 49ers can also grab a playoff spot when they host the Atlanta Falcons in the final “Monday Night Football” game of the season. The contest will also be the final regular season affair at Candlestick Park.

“There may only be two weeks to go in the season, but there’s still plenty left to be decided,” said Worth. “If the past few seasons are any indication, fans could be in for a wild ride.”

For the complete Week 16 schedule, or for dozens of other sports sheets, including the college football bowl schedule, please visit PrintableBrackets.net today.