Warner Hall was among one of 20 Select Registry member inns to participate in a first-ever Lionel Electric Trains Christmas promotion that included Lionel Trains as part of their Christmas decorations. 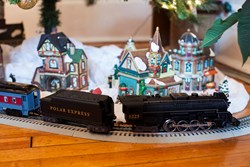 Warner Hall was among one of 20 Select Registry member inns to participate in a first-ever Lionel Electric Trains Christmas promotion that included Lionel Trains in their Christmas decorations.

The Inn at Warner Hall is pleased to present Betty Belcher as the winner of a Lionel Trains locomotive, the Silver Bells. Belcher, along with more than 100 community members, were guests of Innkeepers Troy and Theresa on Dec. 15 for cookies and cocoa with Santa Claus.

Attendees were entered into a drawing to win the Silver Bells Lionel Train.

Warner Hall was among one of 20 Select Registry member inns to participate in a first-ever Lionel Electric Trains Christmas promotion that included Lionel Trains as part of their Christmas decorations.

“We were pleased to have so many children at the Inn, enjoying the trains and getting some face time with the big man in red,” said Theresa Stavens, adding that it was particularly fun to see so many children of couples that have been married at Warner Hall over the years.

Have your own Lionel Trains set at home? Included in the Select Registry and Lionel Trains promotion is a Home for the Holidays Photo Contest.

The only requirement for entering is submitting a photo of a Lionel Train as part of holiday decorations. The photo can be of a personal display from the past or present or one taken at a Select Registry property displaying the trains this season, like Warner Hall.

Prizes include one $500 Select Registry gift certificate and four Lionel O gauge sets that will be awarded to the photos that receive the most votes. Additional prizes will be awarded to 15 entrants randomly selected. The contest and sweepstakes will run through Jan. 15.

About The Inn at Warner Hall: