Facebook and social media news can spread properly with Chatwing’s embeddable tool. Bloggers can also install the chatbox to increase the exposure of their sites. 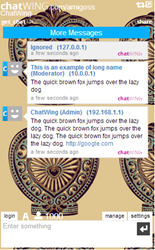 Chatwing developers have recently announced the creation of their newest chatroom tool built for long-term social exchange. The chat app was introduced to web users who are interested in knowing more about Facebook news, gossips, and improvements. According to Chatwing's chat software team, Facebook-related discussions in any website can increase visibility and traffic by as much as 60%.

The Chatwing chat widget tool is essential for all Facebook users because of its capability to reach hundreds of people in one instance. Before Facebook developments even reach the main site, discussions can hover in the chatrooms, thus giving tons of data to the average user. Additionally, Chatwing has a multitude of social media login options: Facebook, Twitter, Google, Yahoo, and Tumblr. The synergy created by these social sites can propel data relay by a high percentage.

Bloggers who rely on social media news as their blogs’ data source can use the Chatwing tool to increase the size of their subscriber groups. They can embed the chatroom app, customize its appearance, and avail any of the premium services that they want. The premium services will increase the overall efficiency of the free chat box.

Awareness is one of the main goals of Chatwing Development Team. The chat room software company is certain that this goal can only be achieved by creating new streams of communication for all web users. To know more about Chatwing’s key strategies, users can check out the company’s Facebook page and Twitter account.