Calgary and area floods, along with tropical storm Haiyan and SuperStorm Standy are tragedies rooted in geography and the human desire to settle on low-lying land near waterfronts – and are not caused by climate change or global warming, says Friends of Science. Historical evidence shows that Tacloban in the Philippines was nearly destroyed by a typhoon in November 1912 when half the population of 30,000 was killed; yet the area remained populated and was devastated again in November 2013. 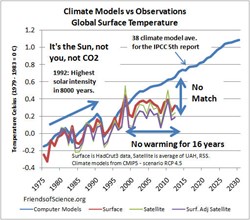 ...claims for climate change loss and damage...as stated in the Warsaw COP-19 discussions, cannot be justified by either scientific or historic evidence.

Friends of Science are warning the public to differentiate between the folly of run-away development in dangerous coastal zones or flood plains and the often-stated human-caused “climate change.” Environment Canada rolled out its annual “Top Ten Weather Stories” with Alberta’s southern flood as the number one story.

Retired environmental biologist and consultant Les McDonald, RP Bio is a Friends of Science supporter who explains that the media rarely examine the true causes of the vast scope of these catastrophes.

“The problem is purely geographical and nothing to do with theoretical anthropogenic global warming,” says McDonald. “When humans settle in ever increasing numbers in geographically dangerous settings with known severe climate patterns, one can expect disaster.”

The number one high-profile example is the flooding in Calgary and High River, Alberta this past summer.

“River flood-plains are on par with low-lying coastal areas as the least safe places to build large scale human habitation,” says McDonald. “When these areas are inevitably flooded it, some people falsely claim it is because of man-made global warming!”

Friends of Science state there has been no global warming in 16 years and that climate change is due mostly to natural factors like solar cycles. This "warming stall" since 1998 was noted as early as April 09, 2006 in The Telegraph in an article by Prof. Bob Carter, at the time a paleoclimate researcher and geologist at James Cook University in Queenlsand.

Tacloban in the Philippines, one of the hardest hit cities by Haiyan, was nearly destroyed by a typhoon in November 1912 when half the population of 30,000 was killed.

Many islands in the Philippines are little more than thin, narrow outcroppings of coral reefs at the mercy of storms.

The damage caused by Typhoon Haiyan, Tropical Storm Sandy, Hurricane Katrina all occurred in low-lying coastal areas that have seen significant accelerated population growth and development over the past century, despite full knowledge that severe tropical storms have hit these locations in the past. According to History Channel website: “During the past century, hurricanes have flooded New Orleans six times: in 1915, 1940, 1947, 1965, 1969 and 2005.”

McDonald notes that New York and New Orleans are excellent examples of the folly of run-away development in dangerous coastal zones prone to occasional severe weather.

“New Orleans is a double whammy mistake being built on a low coastal area prone to hurricanes and on the largest river deltas in North America,” explains McDonald. “The storm surges not only cause floods directly but create a hydraulic dam on the Mississippi causing it to flood as well.”

He notes that plushy homes in New York's Hamptons are often at dangerously low elevations.

“The cost of damage has risen exponentially since WW II when a home in the Hamptons may have been a small bungalow,” says McDonald. “Today it is more likely a mansion with swimming pool and worth a fortune.”

“Throughout human history, people have moved due to natural climate change,” says Ken Gregory, research director for Friends of Science.

Anthropologist and author Brian Fagan recounts how “people living by the shallow ocean knew that the settlements of their ancestors often lay beneath the surface..” in his book “Beyond the Blue Horizon.”

“Consequently,” says Gregory, “the notion of claims for climate change ‘loss and damage’ from industrialized nations to be paid to low-lying countries, as stated in the Warsaw COP-19 discussions, cannot be justified by either scientific or historic evidence.”