Dranoff 2 Piano Foundation presents a concert of contemporary music by 2013 Dranoff International 2 Piano Competition winners Duo Yamamoto and a panel discussion by today’s Academy Award, Grammy and Pulitzer Prize winning composers who have written for the Dranoff and the 2-piano repertoire. 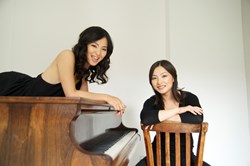 Then on Thursday January 23, 6:00 p.m. at Project 924, 924 Lincoln Road, Miami Beach, a Composers Panel will discuss what’s exciting about contemporary music from the composers’ own perspective. The panel will include authors of Dranoff commissions William Bolcom, Robert Xavier Rodriguez and Shelton Berg, all of whose works are played in the previous evening’s concert, and Gabriela Lena Frank, whose commission was performed at the 2013 competition.

Dranoff International 2 Piano Foundation, Miami’s Gateway to the World of Music
For 27 years, the Dranoff International 2 Piano Foundation has been the world’s leading organization to champion exclusively two piano repertoire and artistry. It is the only international foundation, accredited by the World Federation of International Music Competitions, to discover, promote, and award honors to top professional duo piano artists through its competition, commissions, and presentations of duo piano concerts. The Dranoff promotes awareness to a new generation of students of the transformational power of music and the arts through its multi-disciplinary, educational, and inspirational concert program, Piano Slam.

The Dranoff is one of the few world-class performing arts organizations headquartered in Miami-Dade County, whose activities span the globe and create recognition abroad of the region’s positive image and commitment to the highest standards of creativity and the arts.