Pack a Swimsuit! The Winter issue of American Road® Magazine Takes a Look Through the Lens at Scenes Splashy and Serene 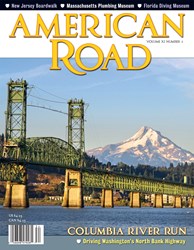 Water wields magic over the traveler—and inspired the Winter issue of American Road®.

American Road’s excursion begins on the north bank of the Columbia River at the turn of the twentieth century. “Bank Shot: The Winding Ways of Old Washington State Road 8” tells the story of Sam Hill, millionaire road promoter, who believed in scenery, sovereignty, and the means of tying both together. Through an odyssey that involved serpentine stage dancer Loïe Fuller, French sculptor Auguste Rodin, and Queen Marie of Romania, Hill orchestrated a promotional coup in support of a river road that still splashes horizons with splendor.

“American Road’s Waterworks” examines California’s Wave Organ, Michigan’s Cascade Falls, Alabama’s Lady in the Lake, and other sites around North America that go with the flow. On US 40, American Road staff chew saltwater taffy; on US 1, Pop Amherst descends into the History of Diving Museum; on US 66, author Jerry McClanahan strolls around Lake Overholser; and on US 20, Executive Editor Thomas Repp pauses to ponder the meaning of all things at the Plumbing Museum. Ultimately, this issue of American Road® magazine brings readers the results of our second annual travel photo contest in “Waterways.” This year, American Road® asked artists to focus their cameras on waterways, waterfalls, beaches, and bridges—and any other sites that leave senses wet.

Pack a swimsuit and bring a beach towel. This issue of American Road® is sure to make any road trip a splashing success!

What’s New
American Road® recently unveiled a new digital edition; a new iTunes app for the iPad; and a new mobile site optimized for iPhones, Androids, and other smartphones.