Machines already launched in Finland, Slovakia and Australia. The Bitcoin ATM will be displayed on January 5th at the pre-CES Startup Debut in Las Vegas. 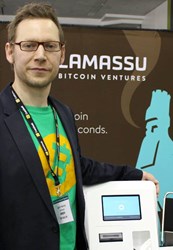 We’ve had orders from all over the world. We will be shipping to 25 different countries and we've translated our user interface into more than a dozen languages. To me it’s a testament to the global reach of Bitcoin.

Within the first four months of sales, the world’s leading Bitcoin ATM manufacturer has received over 120 orders for their sleek countertop machines. After reaching the 100-machine landmark, Lamassu, Inc. set up an online map of bitcoin ATM destinations that will continue to be updated as the machines go live. Over a dozen ATMs have already been delivered, and the rest of the orders will all be shipped by Spring 2014.

“We’ve had orders from all over the world. We will be shipping to 25 different countries, ranging from Canada to Kyrgyzstan, and we've translated our user interface into more than a dozen languages including Russian, Chinese and Friulian,“ says Lamassu CEO Zach Harvey. “To me it’s a testament to the global reach of Bitcoin.”

Online pre-orders for the Bitcoin Machine began in August on the startup’s website. The modern, minimalist design, small footprint and $5,000 price point have made it an attractive investment for Bitcoin entrepreneurs worldwide.

Shortly after Finland’s Bittiraha.fi launched their Lamassu machine in a record store in Helsinki, Finnish blog Bitcoin Nontech reviewed the machine. The machine was deemed suitable for beginners and “ridiculously easy to use.”

Juraj Bednár created a YouTube demonstration of the machine’s simplicity at a Subway restaurant in Bratislava, Slovakia. The process of converting cash to bitcoin took about 15 seconds.

“It’s always exciting for a young startup to have sales ramp up,” Harvey adds. “But what’s really thrilling for us is to know that these will be out in the wild, providing millions of people with effortless access to Bitcoin every single day.”

Lamassu expects additional machines to launch throughout Europe and the Americas in the coming weeks, and the company is taking more orders on a daily basis. Notable locations in the United States include San Francisco, Atlanta and Seattle.

The Bitcoin Machine will be made available for demonstrations and hands-on use at the CES Startup Debut media showcase on Sunday, January 5, from 7 – 10 pm.