On July 20th Urban Oyster will be hosting a special walking food tour that explores the history of sugar along NY’s Waterfront. Celebrity guest guide, Robin Shulman, author of Eat The City, will take you to some of Brooklyn Waterfront’s best sweet spots and show you how important sugar was to NYC’s history along the Waterfront. 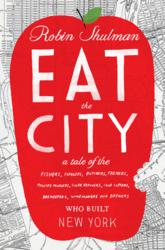 “Few New Yorker’s know how important Sugar is to the history of this city. Sugar was the petroleum of the 16th and 17th centuries.

New York tour company, Urban Oyster, will be offering a one-time sweets tour of Brooklyn on July 20th. They are teaming up with Robin Shulman, author of Eat The City - A Tale of the Fishers, Foragers, Butchers, Farmers, Poultry Minders, Sugar Refiners, Cane Cutters, Beekeepers, Winemakers, and Brewers Who Built New York, to lead guests on a journey of the past and present of sugar along the Brooklyn Waterfront. While learning the history of sugar along the waterfront you will taste some of the best local treats Brooklyn has to offer, from past to present. One Girl Cookie, Ample Hills Creamery and Jacques Torres are just a few of the companies that have made Dumbo as sweet as it is today! In addition to the sweet treats along the way, attendees will also get a signed copy of Robin’s book, Eat The City. This one time only tour is limited to 25 people and is first come first serve!

History enthusiast and owner of Urban Oyster, David Naczycz states, “Few New Yorker’s know how important Sugar is to the history of this city. Sugar was the petroleum of the 16th and 17th centuries. Countries went to war over it. New York was a critical trading post for the West Indies and as a result became the Sugar Capital of the U.S. and it was largely the shipping traffic generated by sugar that made NY into the financial center it is today.”

Eat the City Tour – Sugar on the Waterfront is running in conjunction with Urban Oyster’s recently launched Neighborhood Eats: NY Waterfront Tour. Urban Oyster is well known for their tours that focus on the importance of supporting local businesses and communities. The folks at Urban Oyster were in the process of creating their Neighborhood Eats: NY Waterfront tour when Sandy hit last October. After the storm, Urban Oyster realized their tour was more important now more than ever to aid in the recovery of hard hit neighborhoods. The Waterfront tours help to rebuild the communities like Dumbo and Red Hook, who are still recovering from the blow of Sandy last year, bringing awareness back to the neighborhoods and local businesses.

Eat the City Tour – Sugar on the Waterfront will run July 20th 11am-1pm. The tour will start at the Fulton Ferry Landing in Dumbo. The ticket price includes; 3 dessert tastings, coffee and a signed copy of Robin Schulman’s book, Eat The City. Tickets are $40/person and can be purchased at http://www.urbanoyster.com or by calling 347-618-8687.

Urban Oyster is a New York-based tour and events company, founded in 2009 by David Naczycz. The company has created multi-sensory, theme-based tours and events in New York City, which aim to reveal the stories behind the people and places that make the city's neighborhoods unique, vibrant, and sustainable. Each tour and event celebrates local people, businesses and institutions and serves to connect people directly to these outstanding and vital resources. By doing so, Urban Oyster hopes to contribute to vibrant and sustainable local economies. Urban Oyster offers a variety of regularly scheduled public tours and events as well as offering private tours and events that are enjoyed by native New Yorkers and visitors alike. http://www.urbanoyster.com