Jazz vocalist Kate Ross has returned from two broken necks and debilitating illness to launch her debut CD. Get a sneak preview of the CD when Ross performs with Vaughn Wiester's Famous Jazz Orchestra at the Clintonville Woman’s Club, Columbus, Ohio. 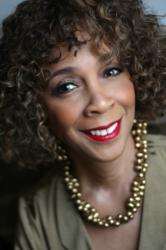 Music has always been enchanting and magical for me; now it's healing too.

"I've suffered two broken necks and I'm still singing Jazz, not singing the Blues." Eight years after breaking her neck for the second time, experienced Jazz vocalist Kate Ross is relaunching her singing career both on stage and with a planned debut CD. Titled People Make the World Go Round the CD will be available in September on CDBaby, iTunes, Amazon and on Ross's website.

Over the years her distinctive contralto and Jazz/R&B style have graced dozens of venues in the Columbus, OH area, where she has performed with Bobby Floyd Trio, The Hank Marr Trio, Eddie Baccus Jr. the OSU Jazz Orchestra, The Broad & High Jazz Trio and many others.

Physical obstacles have been a major issue throughout Ross's singing career. "I was diagnosed with Degenerative Disc Disease (DDD) in the 1970s and it got the point where I could hear scraping when I turned my head - then I'd faint." Despite her illness, Ross kept on working, singing and raising her two daughters as a single mother. She attributes her persistence - and her love of singing - to her mother, who raised her with a strong work ethic.

Ironically, the 1999 spinal fusion operation that should have solved her DDD issues resulted in a broken neck, leading to a second operation two years later. But it was depression following the 2005 car accident that broke her neck for the second time that nearly ended Ross's singing career. "I thought I would never sing again and that really brought me down. And when I had to have another painful operation in 2009, I almost gave up," says the singer.

Almost, but not quite. The support of friends and family helped Ross battle her depression.

"There are so many people, many of whom I have met recently, that have thoroughly been in my corner and inspired me to complete this project. People that have encouraged me, pushed me, even when I did not physically feel like it."

Her signature tune, which is also the title track of the CD, pays tribute to them. The track was written by Thom Bell and Linda Creed and originally performed by the Stylistics. Those who want a sneak peek at her forthcoming CD can catch her performances as featured vocalist with Vaughn Wiester's Famous Jazz Orchestra at the Clintonville Woman’s Club, Columbus, Ohio.

Eight years after the accident, the 60-something singer still has physical and vocal therapy and takes medication to ensure that she can fulfill her dream and live a normal life. "Having my own CD is something I've always wanted to do. I want to get my voice and my story out there while I still can." Ross is also making her songwriting debut on the CD, with the co-written track Kate's Song, which she describes as "the story of my life."

Ross sees launching the CD as another aspect of her recovery. "I just had to see past the pain and fall in love with singing again," she says. "Music has always been enchanting and magical for me; now it's healing too. I hope, through my music, to inspire other people that are facing physical and mental challenges."

About Kate Ross:
Columbus, Ohio native Kate Ross (also known as Kathy Kimbrough-Ross) has been gracing local venues with her distinctive contralto and Jazz/R&B style for more than 30 years, both as a solo artist and accompanied by a trio, quartet, or big band. Find out more about Kate at Kate Ross Music.