SEO is launching a media awareness campaign to shed light on the illegal detention of women in Syria. 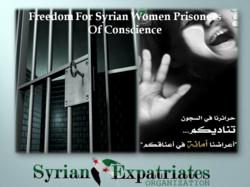 SEO is launching a media awareness campaign to shed light on the illegal detention of women in Syria, a little covered aspect of the crisis. Syrian women have and continue to play an integral role in Syrian Revolution for freedom, dignity and democracy. As builders of a future society, it is imperative that their rights and safety are protected. Each week, SEO will highlight a different Syrian woman prisoner’s story in the hopes that her story will be publicized, and action taken to help secure her release.

This week will be dedicated to Dima Masoud, a worker for the Syrian Red Cross who was arrested in Jaramana on April 23 2013. For more on Dima’s story, please see:http://www.syrian-expatriates.org/seo-freedom-for-syrian-women/

The Syrian Network for Human Rights has reported that there are over 6,400 women in detention, with 1,000 of them being university students. 700 women were reportedly raped while in detention. Conservative estimates peg the total number of detainees in Syria at 37,000.

SEE: Al-Arabiya: Thousands of Syrian Women Detained, Kidnapped and Tortured http://english.alarabiya.net/news-renderer?mgnlUuid=848bf527-900d-4de2-98b1-87bdf865e572
A new report issued by Human Rights Watch on Syrian women prisoners indicates that “Syrian military and pro-government forces known as shabiha have arbitrarily detained female opposition activists as well as female relatives and neighbors of pro-opposition activists and fighters, and in a number of cases, subjected them to torture and sexual abuse.”

SEO continues to demand the immediate and unconditional release of all prisoners of conscience. SEO call on international human rights organizations, including Human Rights Watch, Amnesty International, and Women in the World to continue to use their resources to put pressure on the Syrian government to release Syrian women prisoners of conscience, as well as raise awareness of their plight.