Total U.S. coffee market dollar sales grew an impressive 10% in 2012 thanks to a dramatic jump in single-cup brew segment, according to “Single-Cup Brew Beverage Products in the U.S.”, a new report from Packaged Facts. 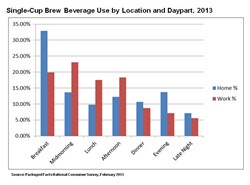 Single-Cup Brew Beverage Use by Location and Daypart, 2013

Total U.S. coffee market dollar sales grew an impressive 10% in 2012 thanks to a dramatic jump in single-cup brew segment, according to “Single-Cup Brew Beverage Products in the U.S.”, a new report from Packaged Facts.

The Keurig K-Cup brewer from Green Mountain Coffee Roasters (GMCR) revolutionized the single-serve coffee market, which posted an astonishing compound annual growth rate of over 75% between 2007 and 2012 in tracked mass-market channels. Research conducted by the National Coffee Association (NCA) in 2012 found that 36% of respondents who had a single-serve brewing system obtained it within the last six months, confirming just how fast this segment of the beverage market has been growing (http://www.ncausa.org).

According to David Sprinkle, the research director for Packaged Facts, “proven market performance and the expiration of an important K-Cup patent in September 2012 has led to a new round of marketplace competition, motivating long-standing category participants to step up their competitive strategies.” One feature of this competition has been an influx of private label and unlicensed beverage pods that work in Keurig K-Cup brewers.

Single-cup brewers provide high-quality coffee without having to venture out or put a larger dent in the wallet. A 2013 Harris Poll found that of the one-third of Americans who indicate they have a single cup brewing machine at home or work, 70% specifically choose to use it instead of buying a drink from a coffee shop (http://www.harrisinteractive.com).

New, more sophisticated and specialized machine technology for single-cup brewers keeps elevating the quality of coffee made at home, while single-serve beverage manufacturers and marketers continue to broaden the array of beverages specifically designed for these machines, increasing the range of successful products, brand entrants, and satisfied consumers. Although coffee beverages still predominate for single-cup brewers, other beverages including tea, cocoa and chocolate, hot and cold fruit drinks, and specialty wellness beverages are increasingly available.

Overall, several factors will continue to contribute to the remarkable growth of the single-cup brew beverage market, including: