According to Wayman Publishing, a Small Press in Utah, the vampire and zombie phenomena are about to be eclipsed by an upswing in angel & demon novels just like Wayman's recently released novel by Shane Stilson, "Middle Damned." 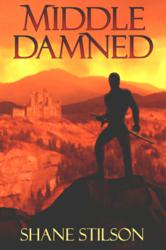 Vampires and Zombies have been popular for years, but recent studies, conducted by Wayman's marketing team, show that fantasy novels about angels and demons, like Stilson's MIDDLE DAMNED, are projected to be the next big thing.

Wayman Publishing recently published an epic fantasy book that is not only engaging readers, but making them rethink the afterlife: Heaven, Hell, and the place in-between. Confident in Shane Stilson's "Middle Damned Series" and the future literary trends, Wayman editor Janie Goltz says, "Vampires and Zombies have been popular for years, but recent studies, conducted by Wayman's marketing team, show that fantasy novels about angels and demons are projected to be the next big thing."

Shane Stilson's novel is already taking a strong lead in this burgeoning new literary wave because of Stilson's unique background and writing style. Working as a control systems engineer, Stilson configures the brains of robots that aid soldiers in their day-to-day and combat activities. This experience, combined with a long history of training in Japanese martial arts, informs a distinctly descriptive writing style.

Not only has Stilson drawn from his knowledge and studies, he's gone even further by creating an epic fantasy taking place in the realm of the dead.

Life after death proved much different than what the Stillwater family expected. Two go into the light, another into darkness, while Blake Stillwater fights for survival somewhere between, in the Realm of the Middle Damned. He will receive gifts from the members of his family he unwittingly killed, but even as those who love the light will be just, the Forces of Evil groom the one now dwelling in darkness to ruin it all. Caught in a crosswind between the dimensions of life and death, a new thought distracts Blake when he can least afford it. Is what he works toward real or is he lost in a coma-induced dream? In an attempt to get back to those of his family who survived, Blake will be willing to risk it all, and the rest be damned.

Wayman Publishing's is proud to be representing Shane Stilson's "Middle Damned." To celebrate this exciting event, the press is giving away two paperback copies through Goodreads. Enter here: http://www.goodreads.com/giveaway/show/56454-middle-damned Middle.