Walla Walla, Washington-based Children’s Resilience Initiative™ announced that it has launched The Resilience Online Store and Services™ to sell and share its unique and mission-focused offerings via the Web. 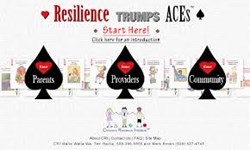 By selling our product and service offerings nationally, we're extending the mission of Children's Resilience Initiative and generating a necessary financial return at the same time

Children’s Resilience Initiative™ (CRI), a community-based response to Adverse Childhood Experiences (ACEs) that was born from a vision that tools and resources could help children, their families, and the community address the potentially devastating impact of toxic stress to a child’s developing brain, announced that it has launched The Resilience Online Store and Services™ to sell and share its mission-focused offerings via the Web. ACEs are childhood traumas that result in actual changes in brain development with resultant negative impacts on adult behavioral and physical health.

Created as a venture to help Children’s Resilience Initiative increase its margin so it’s better able to expand its mission (of community mobilization through dialogue to radically reduce the number of ACE’s while building resilience and a more effective service delivery system), The Resilience Online Store and Services™ is a virtual retail marketplace that offers a variety of highly specialized, hard-to-find, and exclusive Resilience offerings all in one place.

The Resilience Online Store & Services™ was developed as CRI’s response to the many requests for information they received about their efforts in Walla Walla to create a community conversant in Adverse Childhood Experiences and Resilience. According to Teri Barila, CRI’s Director and Co-Founder, “We were asked, “How did you DO that? What tools do you have that I could use in my community? How did you get started?” Barila continued, “The Resilience Online Store & Services™ captures all of our unique products and services in one place, and for the first time ever, gives people a go-to source to find the valuable information, tools, and resources that they need to effectively address ACE’s.”

CRI’s most popular and highly sought-after product offering is its Resilience Trumps Aces Deck of Cards™ and Handbook, an innovative card game for children and their families that includes 42 Resilience-Building Blocks to help incorporate resilience into children’s lives. Each week, the CRI team would receive several telephone and email inquiries from people across the country who were interested in purchasing the offering, but there wasn’t an efficient and effective process in place for the small CRI team to process the orders. It was this demand for the offering that resulted in the creation of The Resilience Online Store & Services™.

According to Mark Brown, Executive Director of Friends of Children of Walla Walla and CRI’s other Co-Founder, "By creating The Resilience Online Store & Services™, CRI now has the opportunity to market and sell a wide array of our offerings targeted to the Resilience community that extends far beyond Walla Walla.” Dr. Brown continued, “By selling our product and service offerings nationally, we're extending our mission and generating a necessary financial return at the same time.”

Since its recent "grand opening”, The Resilience Online Store & Services™ has experienced surprising success. Traffic to the Web site and sales of product and service offerings have exceeded the team's original early projections, and it appears likely the pattern will continue given the strong need and demand that exists for The Resilience Online Store & Services™ wide range of exclusive offerings. Already, CRI has received orders from clients in nearly every state for its popular Resilience Deck of Cards™ and Handbook, along with its books, videos, DVD's, and other merchandise.

Children’s Resilience Initiative (CRI) is a Walla Walla, Washington based program that grew out of a vision that tools could be developed to help children, their families, and the community with Adverse Childhood Experiences (ACEs). The program is based on the fact that ACEs can be devastating to a person’s health and that CRI can address this issue by creating a model of community services and pathways to build resilience.