"The Sword of Senack" Now Available as an Audiobook from Wayman Publishing and Paula Laurvick: Come Discover Unique Mermaids, Dragons, Witches and Much More

Available through iTunes, Audible, and Amazon, MG Fantasy Novel "The Sword of Senack" is Now an Audiobook 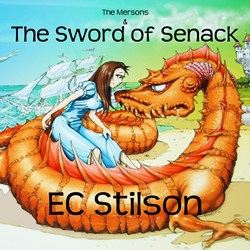 "The Sword of Senack" Audiobook

Fans say Laurvick is the perfect talent to narrate Stilson's book. She captures the main characters with much enthusiasm and embodies the pirates, Secrenas, Thenians and other fun characters with the style Wayman Publishing says they were searching for.

Available on iTunes, Audible, and Amazon, "The Sword of Senack" is now an engaging audiobook. The paperback version was originally published by Wayman Publishing in 2012. EC Stilson wrote this book after her son died and her daughter couldn't understand why her brother was gone. "I needed to write a story about adventure and intrigue, trying to use metaphors to explain what happened. But then the book took off, and became something quite different."

Since 2012, Stilson's fantasy book has captivated children nationwide. She's spoken at dozens of assemblies across across the western states, been to signings for "The Sword of Senack" anywhere from Utah to Los Angeles, California. And now after all of that, the audiobook version is finally here.

Fans say Laurvick is the perfect talent to narrate Stilson's book. She captures the main characters with much enthusiasm and embodies the pirates, Secrenas, Thenians and other fun characters with the style Wayman Publishing says they were "searching for."

This is Stilson's third book released in audio. When asked about this project, Stilson said, "I loved writing about the ocean and mermaids, but I love listening to Paula's rendition even more."

"The Sword of Senack" is an epic fantasy, mainly appealing to children between the ages of 8 and 14.

Aliya Fisher knows nothing about her true heritage until a vindictive sorceress kidnaps her brother and sister. The young adventurer must take up her birthright, battle eerie creatures, and find the Sword of Senack if she hopes to best the witch. But even if Aliya finds the famed weapon and survives the perilous oceanic journey, the enchantress is far more than she appears. How does one defeat an immortal who lusts for revenge?

Wayman Publishing hopes that many fans of "The Sword of Senack" will have a chance to listen to this audio and that new fans will discover Stilson's first fantasy novel.

For more about this audiobook, please visit the following link: http://www.amazon.com/The-Sword-of-Senack/dp/B00DZT43J2/ref=sr_1_1?s=books&ie=UTF8&qid=1374122830&sr=1-1&keywords=the+sword+of+senack+audiobook