Utah Author, EC Stilson, to be Interviewed on KSL's Studio 5 on July 23rd about dealing with infant loss 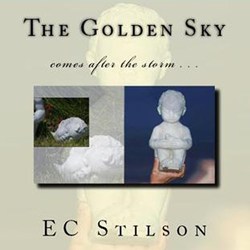 "The Golden Sky" is now an audiobook.

Many people deal with loss poorly because they don't know how to channel their emotions in a positive way.

EC Stilson's first-born son died from birth defects early in 2003. Little did she know, the loss of her infant child would catapult her resolve to help others--especially those trying to cope with the same situation. Now, over ten years later, Stilson shares her memoir, "The Golden Sky" with those suffering from grief. She has played her violin at numerous memorial services and funerals in the western states, talked at counseling groups, and now will be interviewed live on Utah's Studio 5 TV program (channel 5) on July 23rd at 11am MST.

When asked how to best deal with loss, Stilson said, "Many people deal with loss poorly because they don't know how to channel their emotions in a positive way. I made this mistake, taking things out on my loved ones, feeling sad and angry most of the time. But once I found a positive way to deal with my son's death, that's when things changed."

So how does EC Stilson think people should be dealing with loss? She'll be detailing these three steps in her upcoming interview: Connecting with Family, Honoring those Who Have Passed Away, and Using Your Talents to Promote Healing.

According to Stilson, she only truly began to heal after her book "The Golden Sky" was published. "I really got out there and started helping other people. By talking with my own family, honoring Zeke's memory, and then helping others, I was able to find the closure I'd been looking for. In this way, my son's short life changed me even more than I understood at the time of his tragic death. My family and I have traded beauty for ashes, as the saying goes."

Stilson and her husband Cade gladly play Celtic music for, and talk to, those who need help going through the loss of a loved one. After being asked why Stilson's dedicated so much of her life to this cause, Stilson said, "All of my recent accomplishments are because something terrible happened and, with God’s willingness, caring people gave me the courage to overcome any obstacle. I want to give something back to those struggling with the same issues I had to overcome."

EC Stilson's memoir--and secondary interview topic--"The Golden Sky"--has received rave reviews from readers and critics alike. Fellow author Bob Deits said, "EC Stilson has opened her heart and life to us through the 'entries' in this book. She takes us step by step through the joys, challenges and heartbreaks of being a wife and mother. It is a powerful message of hope, not only to those who have lost a baby born with defects, but to everyone who has had their dreams shattered and had to find a way to put life together again."

Not only is "The Golden Sky" something to be proud of, but Stilson's press, Wayman Publishing, has quite a success story as well. Within its first year, Wayman Publishing raised thousands of dollars to donate to non-profit organizations such as Angel Watch, the American Diabetes Association, and the Pregnancy Resource Center. They also published over fifty authors and gained a following that Stilson says she never dreamed of in her darkest moments of grief.

EC Stilson's journey is sure to inspire many readers, authors, and viewers, as Stilson continually tries living up to Wayman Publishing's motto that “the right words can change lives.”

For more information about how to constructively cope with loss, or to schedule an interview with EC Stilson, contact her at the following email address ecboutique05(at)gmail(dot)com.