Lin Wessels, and her son Sam, who has autism, will be meeting with Governor Branstad and Lt. Governor Reynolds today to discuss how the state can better serve families affected by autism. Sam and Lin are riding in the support vehicle for their RAGBRAI bike team named "Autism Wave." 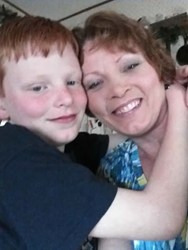 Sam Wessels and his mother Lin

Iowa needs to know that there is a huge wave of these children becoming adults, and this country is not prepared to care for them properly," Says Sam's mother Lin.

Lin and Sam Wessels will be meeting today with Iowa Governor Terry Branstad, and Lt. Governor Kim Reynolds, to talk about what is going on in the world of autism.

Sam is a little boy with autism, and his family is taking part in The Register’s Annual Great Bicycle Ride Across Iowa, to bring attention to the epidemic of autism in the US. Dubbing their RAGBRAI team "Autism Wave" they encourage ride watchers to wave at them in support of those with autism.

Sam's family also chose their name to bring attention to the "Autism Tsunami." While the disorder was rare in the past, affecting only 1 in 10,000 in the 70s and 80s, it now strikes 1 in 50 school children according to the Centers for Disease Control. "Iowa needs to know that there is a huge wave of these children becoming adults, and this country is not prepared to care for them properly," says Sam's mother Lin.

Lin and Sam are riding in their RV as a support vehicle for the bike team. The Autism Wave team has posted signs saying, "Autism: Give us a wave of support," "Autism: prepare for the tsunami," and "Got autism... 1 in 50?"

To honor those with autism, they had 312 families from 39 states, and the UK, Canada and New Zeland, send them names of their loved ones with autism (ages 2 to 49) to be placed on magnets which decorate the cab of the RV. Additionally, in order to bring attention to the terrible risks that those with autism face, the Wessels also have an additional 79 magnets with names of children whose lives were lost because of autism.

"Many people don't understand that some of these special people die prematurely because they wander away from home or safe environments alone, and fall victim to drowning or die from exposure. They are also abused and sometimes killed by those who are tasked with caring for them or looking out for their welfare." The Wessles hope that their message will be heard so that autism will be taken seriously, and the lives of those with the diagnosis can be improved.

They are encouraged that their visit to Des Moines will include a visit with Governor Branstad and Lt. Governor Reynolds to discuss the current state of our understanding of autism. "A great deal of information on autism causation and treatment is being uncovered at the federal level, but it not making its way down to the states and medical systems quickly enough. We will deliver reports on the most recent federal hearings and findings directly to the Governors office in hopes of speeding up the process of getting effective treatments to families, and so that Iowa can find ways to prevent the disorder in future generations. We are thrilled that they are so open to hearing from our community."

The Wessels will be meeting at 3:30 today at the Governor's office. The event is open to the media. The report presented to the Iowa Governor's Office can be found at http://canaryparty.net/index.php/the-news/128-lin-wessels-of-the-canary-party-to-meet-with-governor-of-iowa-on-autism-issues

The Canary Party Autism Brief for the Iowa Governor's Office