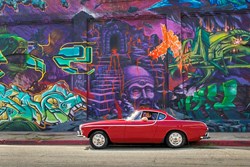 “New Hampshire has the friendliest drivers," said Gordon. "Drivers are courteous. They’ll switch lanes with their turn signals, let me merge, and even wave at me. It's a friendly, beautiful state."

While Gordon has driven his record-breaking Volvo in nations around the world, the vast majority of miles were logged traveling America’s interstates and highways. The 47-year journey has given Gordon countless experiences with the culture, food and amenities in thousands of U.S. towns – large and small.

As he prepares for the final miles of his quest, Gordon shared a few of his favorite experiences and locations across the United States, being sure to exclude his native New York from the list for objectivity’s sake:

Gordon began a movement when he drove off the Volvoville lot in 1966, and that movement continues to grow through the collective experience and passion of current Volvo owners. As Gordon approaches the milestone, Volvo Cars of North America (VCNA) is bringing the nation along for the journey. Consumers can visit 3MillionReasons.com for additional information and to submit their own favorite destinations, dream drives and memorable moments on the road.
# # #