Born with a hearing impairment, author Joy Elan is a vibrant and outgoing single mom who was born in Berkeley, CA to a mother who was herself single. The Stanford University M.A.Ed. graduate shares an intimate, hard-hitting, eye-opening view of her unique life's experiences in uncompromising style in her new book of poetry titled "SILENCE IS NOT ALWAYS GOLDEN: A Poetic Revolution." 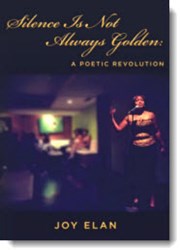 There is more to life than simply making a living and surviving. You must fulfill your purpose by pursuing your dreams... My words are my way of fulfilling my purpose because I am making my dream a reality...

Nationwide: Talented poet Joy Elan announced today the publication of her second book of poetry "SILENCE IS NOT ALWAYS GOLDEN: A Poetic Revolution." Her new offering is quite a departure from its more genteel predecessor, "SIGNS OF LIFE: Past, Present, and Future," which told stories of the normal, yet complicated daily lives of a lover, student, worker, mother, and other recognizable identities. "SILENCE IS NOT ALWAYS GOLDEN" is poetic anthology that defies the norm, boasting a harder, more aggressive edge. Elan pulls no punches as she tells her truth in a manner in which she believes her audience needs to read and hear.

The Black Panther Party's Huey Newton's quote "You can jail a Revolutionary, but you can't jail the Revolution." was Elan's inspiration for her book's title.

As an African American Studies major, the author wanted to pay a tribute to a local hero who is rarely celebrated for his group’s contribution to the Black community and society as a whole. The masterful poet stands up, and sets the world straight about her unique life experiences, and the experiences of her people at-large, particularly those who came long before her.

Among the enthralling collection of poetic works in her new book, Elan's subject matter ranges from the unspeakable hardships of her slave ancestors to her experiences living in a silent word; her feelings of oppression and extinctness, and the need to revolt against that which makes life a challenge—discomfort, disappointment, disrespect, disinterest, disingenuousness, dishonesty.

"Life is hard work! The truth can sometimes be a beautiful thing. For example, my love for my precious daughter is a beautiful truth. My many blessings are beautiful truths. But, ugly truths are a normal part of life. Everyone's life!" she expounded.

Assertive, hard-hitting, authentic, thought-provoking, genuine, scorching, stimulating, and motivating are how Elan's prose in "SILENCE IS NOT ALWAYS GOLDEN: A Poetic Revolution" is being described. “By being around other spoken word artists at open mics, I have learned to evolve as a poet. I have become a spoken word artist where I bring my poetry to life. Watching the other poets/spoken word artists perform their pieces taught me how to dig deeper and push myself further. I didn’t want to write about the struggles in a gentle way because the struggles weren’t gentle to me. So, I had to bring them to life and I realized people really related to what I was saying because it wasn’t just the words, but their intense and deliberate delivery.”

Elan is anxious to share this body of work of which she is so very proud. She is certain that most of its readers will concur with her that “we” have a need and right to a Revolution.

"There is more to life than simply making a living and surviving. You must fulfill your purpose by pursuing your dreams because if you do not, life will pass you by. My words are my way of fulfilling my purpose because I am making my dream a reality and I am showing you that you can do the same." --Joy Elan

In celebration of the her new book's publication, Joy Elan will host a book launch party on Saturday, August 3, 2013 from 4:00 to 6:00 p.m. at Imagine Affairs Art Lounge's new elegantly decorated venue located at 408 14th St., Oakland, CA. The evening will include Elan's book signing, poetry reading and Q&A.

Born with a hearing impairment, Joy Elan has required hearing aids since the age of 15 months. Her hearing loss was attributed to oxygen deprivation caused by the umbilical cord wrapped around her neck at birth. Now, a single mother of a pretty and smart little 5-year-old daughter, Elan was born in Berkeley, CA in July 1983—to a mother who was herself single—and raised in neighboring Oakland, CA where she attended a Deaf/Hard of Hearing program in the Oakland Unified School District (OUSD). At the age of four, Elan was introduced to American Sign Language (ASL). Doctors discouraged her mother from learning to sign as it was believed that her use would hinder Elan's already limited hearing ability.

Despite her hearing loss, she excelled in school and was mainstreamed in a regular classroom. From an early age Elan's hardworking mother filled her with encouragement, assisted her academics, and worked with her on her speech. Throughout elementary school, Elan's teachers were very supportive, but the OUSD would not provide the required accommodations that were listed in the IEP (Individualized Education Program, mandated by the Individuals with Disabilities Education Act (IDEA). After two years of requesting the accommodations, her mother decided to move them back to Berkeley where in the Berkeley Unified School District, Elan was granted all of the necessary accommodations outlined in the IEP. She continued to the middle school and high school fully mainstreamed with ASL, and graduated from Berkeley High School one semester early.

In just three years Elan obtained her undergraduate degree from University of California, Berkeley in African American Studies, then proceeded to earn her Master's Degree in Education from Stanford University, graduating with a stellar 3.67 GPA.

"SILENCE IS NOT ALWAYS GOLDEN: A Poetic Revolution" is Joy Elan's second published body of work. The first was the well-received "SIGNS OF LIFE: Past, Present, and Future," which was published July 2011.

Elan performs her poetry live at venues throughout the San Francisco Bay Area. To learn more about Elan's story, her performances and her books, visit http://www.joyelan.webs.com.

Hearing appliances are not covered by medical insurances or Medicare. Though hearing screenings and medical application for hearing health is covered under the Patient Protection and Affordable Care Act (Obamacare), hearing aids are not required to be covered. http://hearpo.tumblr.com/post/34671196216/obamacare