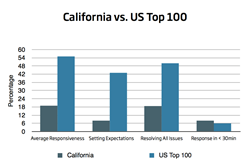 The California report used a star rating system similar to that of the previous report, basing its ratings on factors such as response time, responsiveness to customers, use of social media management systems, and whether companies were resolving issues in-channel or redirecting customers to email or phone.

While all of the brands in the most recent report were responding to customer Tweets in some capacity, only 18.67% were resolving real issues through Twitter. This is a low number, especially when compared to the 50% of companies that were resolving issues this way, according to the Social Customer Service Performance Report of 100 Top Internet Retailers. The rest of the California retailers were only answering simple FAQ questions but not resolving more detailed customer queries and/or directing customers to other channels.

The average response time across all companies - 11 hours 10 minutes - was also much slower than most customers expect (42% of consumers complaining via social media expect a response within 60 minutes).

Conversocial plans to continue its Social Customer Service Benchmark Reports and invites interested companies to contact them for a personalized report.

Headquartered in New York and London, Conversocial continues to expand into the American market. Conversocial has processed more than 330 million customer service interactions on social media and is deployed in more than 20 countries. Companies and organizations such as American Greetings, Barclaycard, Hertz, JackThreads, Net-A-Porter, Publisher’s Clearing House and The University of Phoenix, are using Conversocial's SaaS platform to manage the flow of customer service enquiries and discussions on Facebook and Twitter.