On Tuesday, at a Buckingham Palace reception, the two directors and owners of Voipfone, Colin Duffy and Lee Rose, were congratulated by Her Majesty, the Queen for winning the most prestigious UK business award – the Queen’s Award for Enterprise: Innovation. 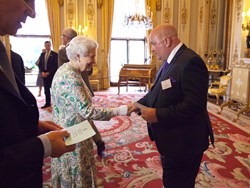 Lee Rose Voipfone's Founder & Technical Director said, "We have a hardworking, dedicated team of people that we are very proud of, they have all played a big part in helping us win this and numerous other awards."

Colin Duffy, Voipfone's CEO said, “Since the award was announced on the Queen’s birthday back in April, we’ve had quite a ride but meeting the Queen today was the pinnacle—particularly on this day, with the birth of the new Prince and all the bells of London ringing.”

“Everyone knows about the Queen’s Award and everyone knows what an honour and achievement it is to win one. We’re all still on a high—it’s great to be recognised for all the hard work that everyone in Voipfone has put in. Now we have to get our heads down and keep on innovating so that we can win it again in five years time!”

Voipfone is an Internet telephone service provided by iNet Telecoms Ltd., which was founded in 2004 by Internet entrepreneur Lee Rose from Woodchurch, Kent.

The company is now jointly owned by Lee and his business partner and current CEO Colin Duffy from Brighton, East Sussex and was formed to develop the latest voice over Internet technologies.

VoIP stands for Voice over Internet Protocol and is a way of sending telephone calls over the Internet and other networks. It’s a new technology, which is transforming telecommunications globally.

Until VoIP was invented, telecommunications was the province of governments and large corporations, but since the turn of the millennium, it’s being used by a few innovative companies to provide new and unique telephone services and is changing the way the industry is structured.

As a winner of The Queen’s Award for Enterprise, the directors are invited to a special reception at Buckingham Palace.

Her Majesty The Queen At The Reception At Buckingham Palace