Tamils for Obama: Tamil Nadu is the Key to saving Tamils in Sri Lanka

The world reacts only when it cannot continue to ignore a dreadful situation, said Tamils for Obama in a letter to Chief Minister Jayalalithaa of Tamil Nadu. Outsiders reacted to Serbian ethnic cleansing in Kosovo when they could no longer turn their eyes away, and popular opinion in Tamil Nadu will be the key to making the international community notice what is going on with the Tamils of Sri Lanka. 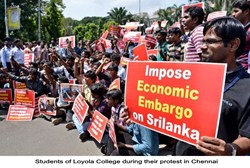 Students of Loyola College during their protest in Chennai, India

"To make the world react to an appalling situation," said a spokesman for Tamils for Obama, "you have to make them see it first. We think that Tamil Nadu--its people and its leaders--will be the ones to make the world see what has been going on in Sri Lanka for decades."

The Tamil American organization wrote a letter to Chief Minister Jayalalithaa of Tamil Nadu urging her, and the people of Tamil Nadu, to continue to draw the world's attention to the persecution of their Tamil cousins in Sri Lanka.

The letter began "We at Tamils for Obama believe that the influence and support of the Tamils in Tamil Nadu and their elected leaders will be decisive in determining the fate of the Tamils in Sri Lanka."

The letter then explained that "The Colombo government's persecution of the Sri Lankan Tamils has always had the aim of minimizing the Tamils' numbers, significance, and cultural weight. The violent oppression of the Tamils has had the aim and result of making those Tamils who can afford to flee leave Sri Lanka for other countries and to make the lives of those Tamils who remain dangerous and miserable. This has been a largely successful ethnic cleansing campaign, and we believe that making the world see it as it is may be the only way to keep it from becoming a totally successful ethnic cleansing campaign. We think that the efforts of our cousins in Tamil Nadu and their leaders will be crucial in pointing the world's eyes toward our distress."

Tamils for Obama then stated their reasoning: "We think that when the world is forced to see a ghastly truth, they sometimes react to put an end to it. When Serbian (Yugoslavian) oppression of the Albanians in Kosovo could no longer be ignored by Europeans, NATO intervened to stop the oppression by Serbia. Tamil Nadu is fortunate to be in a democratic state (India) that hears their voice. India is one of the world's most important countries; when Tamil Nadu forces India to see the atrocities going on at their door step, the rest of the world will have to see also."

The letter concluded "We think that this may be the only way to save Tamil culture and lives, and we think that Tamil Nadu and leaders like yourself will be the key in causing this rescue to happen.

"We thank you and all the people of Tamil Nadu for what you have been doing. You are the Tamils' hope and strength. We urge you to carry on."