Environmental groups, businesses and renewable energy advocates joined together to urge the Colorado Public Utilities Commission to reject a new proposal from Xcel Energy that would discourage rooftop solar growth in its territory. The following statement was issued by Vote Solar, a non-profit grassroots organization. 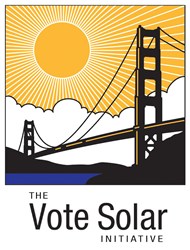 Renewable energy advocates, businesses and environmental groups joined together to urge the Colorado Public Utilities Commission to reject a new proposal from Xcel Energy that would discourage rooftop solar growth in its territory.

Issued last week as part of Xcel’s 2014 Renewable Energy Standard compliance plan, the proposal takes aim at net metering, one of the state’s most important programs for encouraging consumer investment in solar power. The utility is using a contested study that has not undergone public or commission review to make its case against the successful solar policy. The Xcel study and subsequent proposal do not fairly value the many benefits that rooftop solar delivers to Colorado.

Rooftop solar is helping Colorado families, schools and businesses take charge of their power supply and their electricity bills like never before. This private investment in local clean energy is delivering economic, environmental and public health benefits to Xcel’s solar and non-solar customers alike.

Advocates issued the following statements in opposition to Excel’s proposal:

“Xcel is using a flawed study and backroom tactics to attempt to roll back one of the state’s most important solar customer rights. While we understand that rooftop solar represents a change from the utility’s traditional way of doing business, this proposal is a non-starter for a needed conversation about the future of rooftop solar in Colorado,” said Annie Lappé, solar policy director at The Vote Solar Initiative (Vote Solar).

“With this proposal, Xcel is standing in the way of innovation and customer choice to protect its monopoly status,” said Anne Smart, executive director of The Alliance for Solar Choice (TASC). “Instead, Xcel should be working with the PUC and stakeholders to support what the public wants, and what’s good for the state’s economy and environment.”

“To increase energy self-reliance, clean our air, and fight climate disruption; Coloradans know solar energy represents a better path forward. In fact, a poll we conducted earlier this year showed a majority – nearly 60% – of Colorado voters agrees it’s important to have clean energy powering their homes. We encourage the Public Utilities Commission to act in the interest of its citizens and not a monopoly utility when considering Xcel’s proposal,” said Bryce Carter, organizer with the Sierra Club Colorado Beyond Coal Campaign.

“Our state’s solar industry employs thousands of Coloradoans proudly working to build a new energy economy. This latest proposal from Xcel is a real threat to the continued growth of one of the state’s most innovative clean energy industries. At a time when solar has become more affordable than ever, the state's largest utility should be working with consumers, advocates and regulators to expand private investment in solar generation for the benefit of all customers - not cripple the industry,” said Tom Plant, vice president of state policy at Advanced Energy Economy.

“Like many utilities across the country, Xcel Energy is trying to squash one of our most successful solar programs,” said Jeanne Bassett with Environment Colorado. “Rooftop solar provides immense environmental and economic benefits to households, businesses and neighborhoods; while making our electric grid more resilient. We urge our state regulators to recognize that net-metering is an efficient way to fairly compensate owners of solar panels for the value they provide to the electric grid and to reject proposals that would erode this effective program.”

About net metering:
Like rollover minutes on a cell phone bill, net metering gives solar customers full credit on their utility bills for the excess clean power they contribute to the grid. In place in 43 states, this simple crediting arrangement is one of the most important state policies for enabling Americans to generate their own power from solar and other renewable energy resources. Learn more at: http://www.protectnetmetering.org.