d'Oliveira & Associates has posted a new informational graphic about the millions of motor vehicles that are recalled every year. The law firm knows that defective car parts can cause injuries which may lead to an auto accident lawsuit. 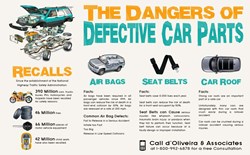 The Dangers of Defective Car Parts Infographic from d'Oliveira & Associates

Every year the National Highway Traffic Safety Administration (NHTSA) receives complaints and conducts investigations related to motor vehicle safety. Since the NHTSA was first established, it has recalled more than 390 million cars, trucks, buses, RVs, motorcycles, and mopeds. This Administration has also pulled 42 million child seats, 46 million tires, and 66 million pieces of motor vehicle equipment from the market (i). In an effort to promote consumer awareness, the NHTSA has released a phone application which allows user to see safety information on a given car. It also updates users on automobile recalls for airbags, seat belts, car roofs, or other defects.

Airbags are required in all passenger vehicles but they may pose a danger if they fail to release during an accident or release too fast. Similarly, seat belts can cause injuries if they are defectively designed or improperly installed. Finally, car roofs are defective if they cruch too easily during a rollover accident. People who have been injured by a car defect should talk to an auto accident attorney who can provide legal advice on the matter.

According to Time Magazine, car defects are responsible for some of the “worst cars of all time.” The Ford Pinto could burst into flames after a rear-end collision while Firestone Tires on Ford Explorers were responsible for hundreds of rollovers (ii). In order to avoid similar dangerous situations, new auto recalls are issued every year so it is important for consumers to stay updated. According to CNN Money, millions of cars have been recalled this past year due to their air bags. Honda recalled 1.1 million cars in order to replace airbag inflators. The company stated that “the passenger from airbag inflators in affected vehicles may deploy with too much pressure, which may cause the inflator casing to rupture.” Similarly, Toyota recalled 1.7 million cars after five reports that airbags had malfunctioned. According to the article, this news is particularly damaging because the company has had to pull tens of millions of cars from the market in the past few years (iii).

Paul d’Oliveira stated, “An automobile defect can have devastating consequences during a car crash. People rely on safety devices like airbags and seat belts but a defective design or negligent installation could cause serious injuries. Our law firm has over 24 years of experience handling auto accident lawsuits and we are ready to investigate whether an automobile defect exists.”

The defective car parts infographic alerts consumers to common auto defects. d’Oliveira & Associates has experience handling auto accident lawsuits and investigating claims of defects. The firm has 15 law offices located throughout Rhode Island and Massachusetts with legal staff ready to answer your questions. They also work with defect lawyers, who handle these cases, and there are no legal fees unless you receive a settlement or award. Contact the law firm by calling toll-free at 1-800-992-6878 or submit a contact form online for a free legal consultation.