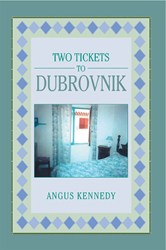 Learning how to navigate through an unfamiliar culture not only tests one’s creativity, but also one’s personal integrity and values.

Two Tickets to Dubrovnik by Angus Kennedy is set in an ancient Balkan town that has old world charm mixed with modern world problems. The story follows wine writer Andrew Johnson during his stay in Dubrovnik and all of the people he encounters along the way.

He eventually becomes involved in with Niki, who has some unsavory relations that end up putting a strain on their relationship. Putting his integrity to the test, Johnson eventually faces difficult decisions when he learns about the criminal activities of Niki’s family.

Besides covering issues related to personal integrity, this novel also shows how diverse European culture is and highlights the importance of history. Dubrovnik is a picturesque town that hides a tumultuous past and present behind its perfect exterior.

Readers will be entranced as Johnson navigates his way through this unfamiliar environment while attempting to remain true to his personal integrity and values.

“Dubrovnik is an extraordinarily beautiful city whose picturesque exterior hides a tumultuous past and present,” said Kennedy. “This is precisely why I chose to this city as the setting for this intriguing story.”

Angus Kennedy was born in 1946. After attending school and university in Sydney, he spent nearly 40 years in the sugar refining and winemaking industries in Australia and New Zealand and travelled extensively on winery business throughout Europe and the United States. He is currently retired and lives in Adelaide in South Australia.