In our nation's New England states, heroin use is rising at a very high rate. Illustrating the importance of early detection of drug abuse, those with substance abuse issues should contact a detox center like Harbor Village. 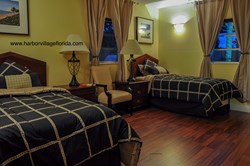 “Drug abuse can create many health issues and cause you to lose everything. We ask that anyone who suffers from this dependency to contact a detox center such as Harbor Village to start the recovery process,” said Robert Niznik, Harbor Village CEO.

According to the New York Times article on 7/18, Heroin in New England, More Abundant and Deadly, heroin use is increasing rapidly in the small towns of New England states such as Maine, Vermont and New Hampshire. The chief reason for the rise in heroin use includes the new restrictions on attaining addictive prescription painkillers. Heroin is also easier to snort and is cheaper to buy.

Whether someone suffering from a drug dependency is taking heroin or another addictive drug, it is highly important to seek the professional counseling and assistance found at a qualified detox center such as Harbor Village. A 24/7 medically supervised facility, Harbor Village allows each client to receive private drug rehab in a luxury, state-of-the art environment. Located in South Florida, clients are welcomed with upscale accommodations including a suite with satellite television, 30,000 square feet of outdoor lounge area, spa, salon, massage and acupuncture services, Internet and NetFlix access, nutritious, gourmet dining and a results proven plan for recovery.

As posted in the article, Heroin in New England, More Abundant and Deadly, experts say there has been a steady increase in the availability of the crystalline powder and deaths attributed to its use. “It’s easier to get heroin in some of these places than it is to get a UPS delivery,” said Dr. Mark Publicker, an addiction specialist.

Like many other cities and small towns across the nation, New England is experiencing “an inordinate number of heroin overdoses,” said Vern Malloch, assistant chief of the Portland Police Department. “We’ve got overdose deaths in the bathrooms of fast-food restaurants. This is an increase like we haven’t seen in many years.”

Dr. Publicker, president of the Northern New England Society of Addiction Medicine, believes that doctors in the area have been prescribing painkillers far too often, which are stepping stone drugs to heroin.

“We had a bad epidemic, and now we have a worse epidemic,” Dr. Publicker said. “I’m treating 21-, 22-year-old pregnant women with intravenous heroin addiction.”

“Drug abuse can create many health issues and cause you to lose everything. We ask that anyone who suffers from this dependency to contact a detox center such as Harbor Village to start the recovery process,” said Robert Niznik, Harbor Village CEO.