Dedicated to the construction and resurfacing of athletic courts and tracks throughout Connecticut, Class Turf Company’s Pal Park will bring new and improved recreation to the Waterbury area. 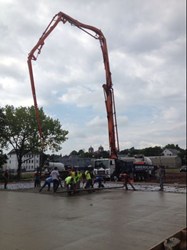 The Police Activity League Park, more commonly known as the “PAL” Park, will be located on the corner of Division Street and Griggs Street and is estimated to be completed near the end of the 2013 summer season.

During the early weeks of July 2013, Classic Turf Company began work on the new PAL Park project in the city of Waterbury. Once completed, the 2.2-acre park in the heart of the North End will offer new and improved recreation for the city’s occupants, including four post-tension concrete basketball courts built by Classic Turf Company.

The Police Activity League Park, more commonly known as the “PAL” Park, will be located on the corner of Division Street and Griggs Street and is estimated to be completed near the end of the 2013 summer season. Commissioned by both the City of Waterbury and the Police Activity League, the new park is currently undergoing the construction of four post-tension basketball courts using Classic Turf's patented Prime Coating Sports Surface. The combination of these two innovative and highly durable materials will ensure that these athletic surfaces maintain their structural integrity for years to come.

Post-tension basketball courts are constructed using concrete, providing a sturdy playing surface that is less susceptible to the effects of changing climates and weather conditions. Unlike asphalt, which is much less resilient over time, concrete is also highly capable of resisting and controlling cracks, and will typically have a higher flexural capacity overall.

Aiding in the stability of the post-tension concrete, Classic Turf Company’s patented Prime Coating Sports Surface is made up of several layers that result not only in a strong sports surface, but a waterproofing system as well. Each component of the Prime Coating Surface works to seal and protect the post-tension concrete and keep it in prime condition for a prolonged period of time.

Classic Turf Company is a full-service tennis court and sport surface supplier and has been constructing and resurfacing athletic courts and tracks in North America for more than 30 years. Their dedication to providing clients with sports surfaces that will withstand both time and wear have earned them their reputation for excellence in both skill and customer service.