QuiBids is one of this year's honorees of the Metro50 in Oklahoma City. 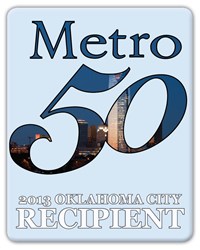 Knowing we made the Metro50 list with another 49 outstanding companies is not only exciting, it’s humbling too.

“This is an amazing award and one that we’re pleased to accept,” said QuiBids CEO, Matt Beckham. “We’ve waited a long time for this award and look forward to celebrating with all the other honorees.” The Metro50 will be held on Monday, September 23 at the National Cowboy and Western Heritage Museum at an awards banquet. The official Metro50 rankings will be unveiled that evening by Mayor Mick Cornett.

Over the years, QuiBids has grown from five to 120+ employees, offering its services in eight countries and expanding, and continues to strive for excellence in its industry. It is paving the way of online entertainment shopping through a unique and fun business model. See QuiBids LinkedIn page for additional company information.

“QuiBids has faced many obstacles and has been a fun challenge,” said Beckham. “Knowing we made the Metro50 list with another 49 outstanding companies is not only exciting, it’s humbling too. We know all the employees at QuiBids have contributed to its success and we’re honored to have the staff that we do.”

The Metro 50 Award allows both emerging companies, as well as companies that have exhibited a substantial history as an established business, to be recognized. All those on the Metro 50 list demonstrate positive growth in revenues; growth in the number of employees; creativity/entrepreneurship; and business development through the expansion of facilities, customer base or markets.

About QuiBids
QuiBids is an online entertainment retail auction site that launched in October of 2009 with the mission to be the most fun way to get what you want online. Their live auctions are more exciting, reliable and safer than other online auction websites. QuiBids has been a Better Business Bureau (BBB) accredited business since 2010 and has had its bidding and shipping processes voluntarily examined by Grant Thornton.