Tired of shows that are thinly-veiled commercials, parents show support for children's programming that puts minds over merchandising. 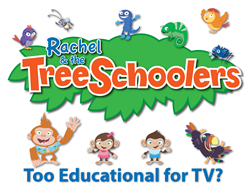 If you watch children’s television, you’ll notice a departure from educational programming, even for preschoolers. You’ll also see that there are few, if any, real human beings….Where is the Mr. Rogers for the next generation?

When Two Little Hands released the first episode of its new series for young children: Rachel and the TreeSchoolers, they began pitching the series to television executives. When the show was turned down, they were shocked to learn why. “We were told more than once that the show was just too educational for television,” said show host Rachel Coleman.

“If you watch children’s television, you’ll notice a departure from educational programming, even for preschoolers. You’ll also see that there are few, if any, real human beings. My response was: Why would we want our kids’ role models to be monsters, aliens and sponges that yell out every conversation they have? Who talks like that in real life? Where is the Mr. Rogers for the next generation?”

Rather than modifying Rachel and The TreeSchoolers, which introduces a complete preschool curriculum over 12 episodes with support materials, Two Little Hands decided to preserve the show’s educational and values-driven content.

“It’s what our fans expect. Our other shows [Baby Signing Time, Signing Time and Potty Time] help children learn new concepts with songs and sign language. We refuse to dumb down the new show just to get it aired on television,” says co-producer Emilie Brown.

Left with the problem of getting the show funded, they turned to crowd-funding through Kickstarter. “The beauty of Kickstarter is that parents can ‘vote’ through their pledges. If they want programming that puts children’s minds over merchandising, they can become backers. If parents show us that there’s a demand, we’ll make the shows,” said Linda Easton, Director of Marketing at Two Little Hands.

Two Little Hands launched the Kickstarter campaign on July 15. Within two weeks, fans had funded the $50,000 necessary to complete the two episodes that were in production.

“Now, with Kickstarter we can involve our fans even before we start production,” Brown states. “In fact, one of the rewards our backers can choose is having their child filmed for our next show.” In addition to getting copies of the new episodes, backers can choose to attend a pizza party or have coffee with Rachel, or have Rachel at child’s birthday party.

With each additional $50,000 pledged, an additional episode gets funded. Two Little Hands hopes to fund all 12 episodes of Rachel and the TreeSchoolers before the campaign ends on August 14th.